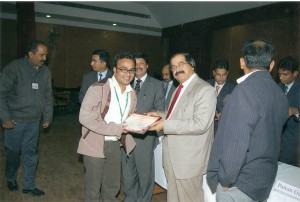 I, receiving the certificate

I finally got my tour guide license on the 30th after three years of wait because I had applied for it in the year 2006. I started preparing for the entrance exam after applying for the license in 2006 and continued it for a few months but finally I stopped because the tour guide association of India sued the Indian government for issuing the license. They never want new people to come in the industry as they are afraid of loosing their bread and butter because most the old guides are not good. They got their license when it was so easy to get it. Now the process is tough but it will definitely produce better tour guides who are at least trained to not chew betel while talking with their clients:) 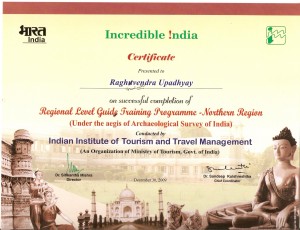 My brother Chandan, who is an escort, told me something really funny. He said that when he was in Benares last time with his group, he had hired a government approved tour guide who went with them for morning time boat ride. This tour guide started talking about Benares, Hindu religion, Benares culture and Ganga. He said several times that Ganga is not only a river for Hindus, she is considered as mother. After a few minutes when his speech ended, he started chewing betel and later spited it out in the river Ganga in front of his clients. The clients got really upset and they asked him if Hindus spit on their mother and he just did not have any answer. I hope the people who have attended this training program will not do such thing. 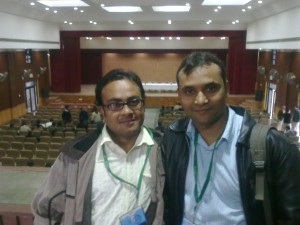 Sana and I at convocation hall 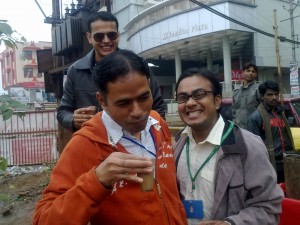 The training was held at IITTM in Gwalior where I got to learn a lot. The total duration of training was 16 weeks- 6 weeks of classroom teaching and 10 weeks for field work. There were over 75 lectures in 6 weeks and I did wrote my research paper on Benares. I focused on cultural diversity of Benares. There was a written exam and an interview at the end of the program and I passed both and finally got the certificate. Now I have to go to Delhi to India tourism office with a police verification certificate and then they will issue me a provisional license which will be valid only for two months. And after two months my red card (the permanent license) will be issued. I hope they will not create any problem in Delhi.