The seventh week of the guide training program is done which was the orientation tour of Agra>Jaipur>Delhi. Our first city was Agra where we visited four monuments- Taj Mahal, Red fort, Sikandara (Tomb of Akbar the Great) and Itmad Ud Daula. We had one guide for fifty participants. Agra was a crazy city. The water there was so sour. We were suggested by our institute to use only bottled water. There were touts everywhere trying to sell something all the time to everyone near the monuments. We were brought to a few tourist shops also. Those shops were huge, literally huge.

The shops in Agra, Jaipur and Delhi had arranged our breakfast, lunch and dinner. It was a good opportunity for them to bring two-hundred tour guides all together to their shop at one time. They showed us around their shop, explained us how do they work and gave some gifts also to all the participants. I am sure it was a good deal for them. But the shops were so expensive. All the stuffs in those shops were at least ten times more expensive than the normal market rate but the quality of the product was also very nice.

We visited four monuments in Jaipur as well- Jaigarh Fort, Amber Fort, City Palace and Jantar Mantar. The condition of water in Jaipur was exactly same as the water of Agra. I liked all the monuments but City Palace. The City Palace was a very very commercial place. They had opened only a small part of the palace for the visitors. If somebody wants to visit other part, which is not open for visitors, they can do it by paying extra money and this extra money is decided by looking at the visitor’s profile. The City Palace doesn’t accept tour guide licenses given by the government of India; they issue their own license.

After Jaipur we headed to Delhi which was crazy as usual. I heard something really crazy that TGFI (Tour Guide Federation of India) had instructed all the tour guides to not train us during our orientation tour of Delhi and that is why our institute had a hard time getting a guide to give us tour and train us. None of the guides in Delhi agreed to work with us. Finally the institute had to hire a monument guide. It was crazy to see how opposed TGFI was. They are the people who had sued the government against this training program but when they saw nothing happening in their favor, they did this crazy protest.

The shops of Delhi were also not so helpful as the shops of Jaipur and Agra. Even though our lunch, dinner and breakfast were organized by the shopkeepers in Delhi but the experience was not as good as the Jaipur and Agra one. My overall experience was nice but I did not learn much during the tour because there was only one guide for fifty participants but it was okay. I know that I will not start working somewhere out of Varanasi right after getting the license because I want to study first. I will start working in Benares first, then study about other cities, maybe go there and hire a guide and then work in other cities.

Finally the last week of classroom teaching is finished now. This week we had classes about Jaipur, Indo-Islamic architecture, things to do during any emergency, gems and jewellery, Jainism, business history of India and a few classes about the project report and upcoming tour. All the classes of this week were fine but I like the “things to do in any emergency” class the best. The lecture was delivered by a retired air hostess of Air India. She taught us about what we should do during any emergency but the thing that made her class best was her openness and her topic that no lecturer had ever talked about during the training.

She talked about medical problems, sex, homosexuality, HIV, AIDS and other STIs. She taught us what we should do if any tourist asks us to have sex with them. She said that first of all it completely depends on us whether we want to have sex with the tourist or or not, but if we decide to have sex with the tourist then we should never forget to use condoms because there is high risk of STI transmission by having unprotected sex. She seemed so concerned about HIV and AIDS. She said that since she had worked in the service sector, she had sex with several different kinds of people but she always used condoms.

I just could not believe her openness about the subject. All of the participants of my batch were males and she was the only female amongst us but she talked about sex which doesn’t happen in India usually. Everybody enjoyed the lecture a lot. On the last day of this week when all the participants were called together in the auditorium of the institute we were provided a certificate of participation. This certificate will help us talking with the government officials for our project. The female participants were called separately on the stage to motivate them. The institute said that Indian tourism industry needs female tour guides in India and we should promote them.

I have passed five weeks in Gwalior doing the training, now just one more week of classroom teaching to go in Gwalior and then we will go for the tour. This week was also very interesting. We had classes about Indian Buddhism, Indian archeology & rock painting, conservation, Kailash Mansarovar, Ayurveda, Taj Mahal, Indian classical music, vocal and dance, virtual reality in tourism, travel legislation and there was one class about our project report. The class about Indian Buddhism and Taj Mahal was the best one and the class about conservation and Indian classical music, vocal and dance was the worst one of the week.

The lecturer delivering lecture about conservation was too fast. He spoke continuously for two hours, it was crazy. No time for anything else. He would just change the slide and start speaking about it, and then again change the slide and speak about it.† He did not want anyone to go to washroom during the class. He asked us to use the washroom before the class was started and then asked us to lock the door of the class. The class about Indian classical music, vocal and dance was also not interesting. The performance was good, actually it was entertaining because they played instruments before us and performed a dance but the lecture was again terrible.

He started his lecture with Indian Buddhism but switched soon to the present politics, religion, politics in the past… He was more interested in teaching us about how life in India is good, why politicians are corrupt and how we discriminate and why we should not discriminate anyone on the basis of their country, state, sex or religion. It was really a nice lecture, we laughed most of the time and enjoyed it a lot. He told us really interesting things like over 40% of the heart attacks take place on Monday in the US and Canada because of too much work pressure.

Our program for the tour is also decided now. The classroom teaching at Gwalior center will finish on the 18th and the practical training in Agra will start on the morning of the 19th so we are taking a train on the evening of the 18th. The participants will have to arrange their own lodging and fooding, the institute will arrange five coaches to take us around and they will invite experts to train us. Our training in Agra is on the 19th and 20th, 21st is off.
The training in Jaipur is on the 22nd and 23rd, 24th is off and then our final training will take place in Delhi on the 25th and 26th. 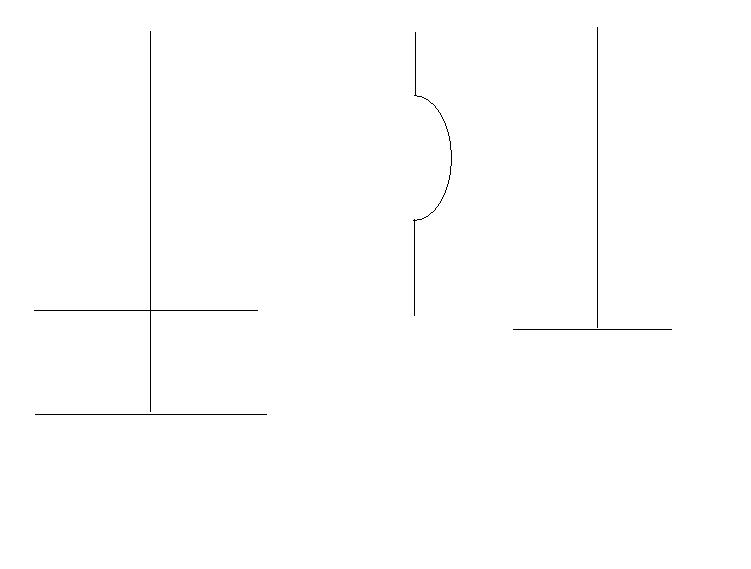 Nandan in Bramhi (the oldest script)

The fourth week of the training is completed now so only two weeks to go and then I will head for the one week of tour of Delhi, Agra and Jaipur and then finally to Benares for my field work. This week was also very interesting as we had a few very nice lecturers and very interesting lectures about the travel industry in India, Indian art, Varanasi, temples, Indo-Islamic architecture, cultural difference, epigraphy and numismatics, temples of Bateshwar, Indian classical music and tourism in Himanchal Pradesh but I liked the epigraphy and numismatics, temples of Bateshwar and tourism in Himanchal Pradesh lectures best. 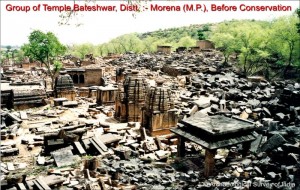 The lecture about Indian classical music was crazy. Nobody understood anything. The professor wanted us to sing. He was so similar to the professor who delivered the lecture about astrology last week. Astrology and Indian classical music, both subjects are kind of unknown to the participants. We know about them but we don’t have good knowledge about them and it would have been better if they would have taught us about the basics of these subjects but their lecture was for someone who already had at least basic knowledge of these subjects. 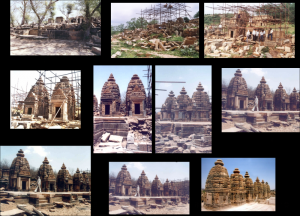 Mr. Mohammad K K, the lecturer who taught us about temples of Bateshwar was amazing. He is Superintendent Archaeologist of ASI. He showed us a slide show of his work in Muraina, MP. He said that Muraina had a group of over 200 temples but they were all destroyed during an earthquake about 1300 years ago. So these temples were underground for over a thousand year but nobody ever thought about them. This whole area was captured by really dangerous naxalites. They used to live in those temples so nobody ever dared to go there. Mr. Mohammad K K and other officers of ASI went there by taking help of the locals and met naxalites.

Naxalites also permitted them to work on the temples. They excavated that area and were shocked to see what appeared in front of them. The temples were completely broken. They collected all the materials and started reconstruction. They used the same material and built the temples again. They had to use new materials as well sometimes but most of the material is taken from the same place. It is hard to imagine how they did it. This presentation had not much to do with tour guiding profession because no tourist would go there in near future but I loved it. I loved the dedication of Mr. Mohammad K K towards his job. It was awesome.

The lecturer who taught us about Indo-Islamic architecture was an expert from ASI. He told something really strange. He said that foreign escorts who come to India with foreign tourist groups must be banned at the monuments. He asked all the candidates to write a letter to the Prime Minister of India demanding prohibition of foreign escorts at Indian monuments. I did not know anything about it so I asked my friends about it and they said that foreign escorts come to monuments, take a local guide but after the site seeing they pay to the local guide and that’s all.

Whatever they told me about the foreign escorts sounded fine to me so I asked them what was the problem and they said that the foreign escorts do not bring them with the group to the shops so no commission for them. It sounded like a genuine issue to me because a very important part of the tourism is to help the local community economically and the rate decided by the government for guides is not enough to support their livelihood, so they depend on the commission and tip given by the clients.