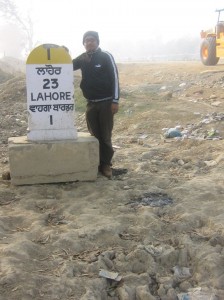 I went to Amritsar after submitting documents tour guide license at India tourism office at New Delhi. I had already heard a lot about the flag ceremony that takes place at Wagah India-Pakistan border and this was the main reason why I wanted visit Amritsar. I was supposed to arrive Amritsar on the evening of 9th but I arrived on the afternoon of 10th as my train was delayed by 17 hours. I just looked for a hotel near the railway station, put my stuff in my room and head immediately to Wagah because the parade was supposed to start at 4.30 Pm. I had enough time to reach Wagah before the parade starts, but I wanted to be there early to see what was going on. 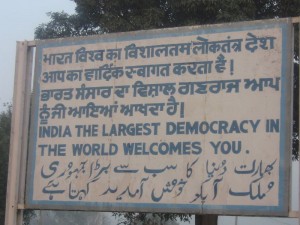 Yea, but the most corrupt

The bus left me two kilometers before the border and then I had to take a rickshaw. There were a few things that I really wanted to do in Amritsar and watching people was one of them and that I why I decided to take a bus so that I can talk with more people and see them.† The bus was completely full but fortunately I got a seat. I arrived at Wagah border at 3 o’clock but it was the trade time and the border entrance was not open for general public, only traders were allowed to enter to do their business. Wagah border was also like other tourist places in India. 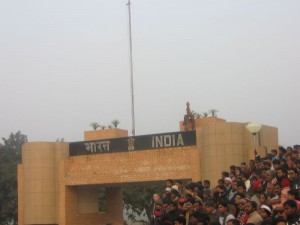 These guys have really tough life

There were not many shops but they a few restaurants and convenient stores and these shops had touts working for them. Several people came to me who wanted to eat or drink something at their brother’s restaurant but I think they did not know that I was from Benares where whole tourism industry is dependent on touts and I was very well aware of it. Anyways, I was not hungry at all so my rickshaw driver did not get any commission. Wagah border was the first place in India I had ever been where they were really taking care of the time. 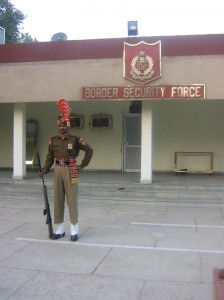 The border was supposed to get closed for traders at 3.30 and it closed right at 3.30.† After the border was closed for traders, tourists were asked to make a queue. I think there were around 3,000 people to attend the parade. There were a few rickshaws also who were telling that if someone goes with them, they will get the seat in front but I did not know how this was possible but actually it was true. There were two gates, about 500 meters away from each other. We were in queue at the first gate but the security check was in between the first and second gate. People were shouting Vande Matram and Bharat Mata ki jai and were so excited to get in. 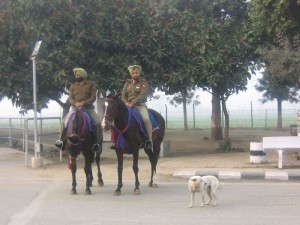 What the hell is this?

It was all about arriving at the security check first in order to get a front seat at the parade place and rickshaws are definitely faster than normal walking speed. The first gate was opened at 4 o’clock and everybody started running to the second gate where there was a security check. Everybody was checked properly and were sent to the parade place. I was so happy to see the management but suddenly I saw something that again made me feel like we are still India. There were two policemen sitting on horses but again there was a dog standing next to them. What if the had a bomb inside his body? 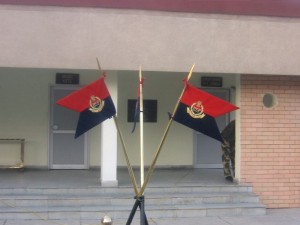 I am never ever surprised to see wild animals just anywhere in India, even inside the government offices or just anywhere but near the high security zone? It was something that really surprised me. Well, the parade started at 4.30 and it was something that I am not going to forget in near future, maybe never. The parade was just awesome. There were about 3,000-4,000 people from India side but not many from Pakistan side. The Pakistan side sitting arrangement could also be seen from India side. I think there were hardly 300-400 people. I think it was just because they just don’t have as many people as us, after all we are over a billion people now. 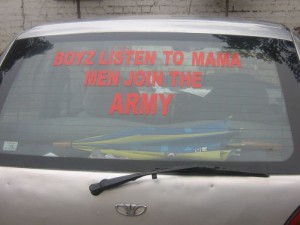 You see this everywhere in Amritsar

People were shouting and jumping to encourage their side army.† I was talking with locals about why such parade is organized and they told me that the idea behind it is to bring Indians and Pakistanis closer but I don’t think it is working that way. The Indian and Pakistani army men doing the parade were pretending to be so aggressive against each other and I think this is what people want to see. It was so fun. I liked it. The parade lasted for lasted for 45 minutes and finally flags were taken down from both sides and were kept in the offices. 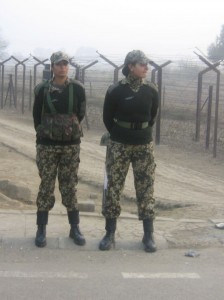 One of the best things I had ever seen

After the parade ended and I was on my way back to the bus, I saw something that doubled my happiness. I saw females securing our border, it was really a great feeling to see females in our army. In a male dominant India society where most of women still manage only kitchen, it was a great feeling to see females securing ourselves and our border. I had already seen female police in the cities, and they look crazy and fat and lazy like male police but these females at the border seemed like they really work hard. They were managing the crowd and doing security check for females. But they were not only associated with females, they were managing male visitors as well. 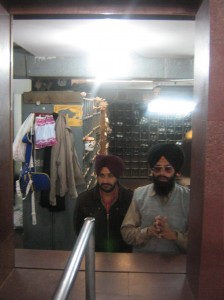 Volunteers at the shoe stand

They looked fit, they were confident, they were smart and they were really doing something. It was just amazing feeling to see them. After attending the parade I took a bus back to Amritsar and went to Swarn Mandir (Golden Temple). This temple was beautiful and really huge. I had already heard about Sikhs at the Gurudwaras cleaning the shoes of the visitors for religious reasons but I never thought that this tradition is really important for Sikhs. They had at least 10 huge shoe stands for visitors and they had volunteers working there to arrange shoes of the visitors.† There were two people at each shoe stand and they seemed eager to manage the shoes. 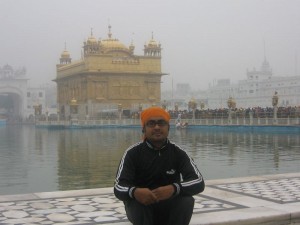 Visitors don’t even needed to bring their shoes near the shoe stand, all they need to do is that take their shoes off and put it on the counter and then the volunteers would take the shoes and put them in stand. Visitors were not allowed to enter in the Golden temple without covering their head with any cloth. They had a counter where they were offering free small piece of clothes to the visitors. I also grabbed one and entered in the Golden temple. Amritsar was seriously cold. The maximum temperature was 10 degree and minimum was 0.8 on the day I was in Amritsar and walking barefoot on wet white marbled temple was making it more cold. 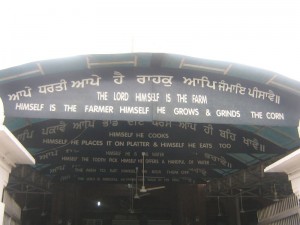 Langar at the Golden temple

The temple was beautiful and was really huge. The temple was crowded but there was very good management so I never felt like it was too crowded. I went inside the temple, spent sometime watching people, reading wall writings and came back to hotel. I went to the Golden temple again next morning and this time I spent more time there. There was volunteer working going on everywhere. Somebody was cleaning the floor, somebody was helping with their Langar facility, somebody was distributing medicines, someone was cleaning the dishes… 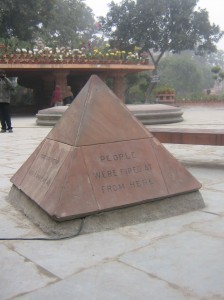 No words for this

I spent almost 4 hours in the Golden temple, had my lunch in the Langar and finally headed to Jaliawala Bagh. This place is known for massacre of 2000 Indians during British Raj. Now this place is converted into a memorial where they have an art gallery, the well where 120 people fell down while trying to escape, the walls where bullet marks are still there and a few other things. This was an emotional place for of the visitors. I heard many people talking about how cruel the massacre was, of course it was. I spent about two hours there and then headed to Maharaja Ranjit Singh museum. 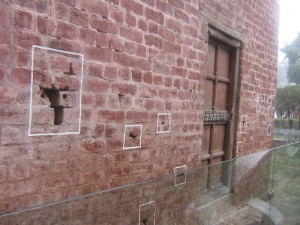 This museum was a new museum but it had no power backup in case of power cut. I arrived there around 2 o’clock but they asked me come after 3 o’clock as it was power cut that time and they did not have any power backup. It was crazy to see that the government had spent such a good amount of money to built that museum but they did not spend a little bit of money to buy a generator for power backup. I just wandered around the museum for an hour and then finally came to the museum at 3 o’clock. The museum was a good place to learn about Mahraja Ranjeet Singh’s life. 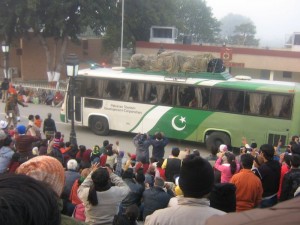 y successful as I got to learn about Sikh religion and saw flag ceremony at Wagah border. Everything was just awesome in Amritsar except temperature. I knew that it was going to be cold but I did not know that it would be this cold. The maximum temperature was 10 degree Celsius and minimum temperature was 0.8 on the day I was in Amritsar means too cold for me.† I went to the railway station to enquire about my train and came to know that my train was canceled due to fog.

This was the worst thing happened with me during this trip. I felt like I was stuck in Amritsar. I tried to get a ticket in another train coming to Varanasi but there was no reservation in it. Finally I bought a ticket to Delhi by bribing Rs. 50 to reservation clerk and booked another ticket from Delhi to Varanasi. I feel like two days were not enough for Amritsar. I would like to visit that place again someday in near future.

2 thoughts on “Tourism in Amritsar”