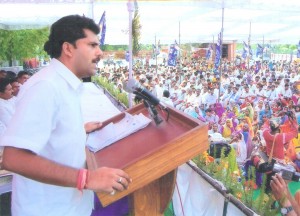 Arun Pathakis a politician and a social worker from Varanasi. He is famous all over the world for his style of protest by committing suicide. His protest against the movie water in the year 2000 made him popular all over the world. I had been hearing about him ever since I started hearing, had seen him several times in my neighborhood and had read his name in the newspapers and magazines several times but I got to meet with him last year when I was working with Irene, a researcher from Italy. When Irene asked me to arrange a meeting with Mr. Pathak, I was not really if I would be able to arrange it because Arun Pathak has become a very powerful politician now. 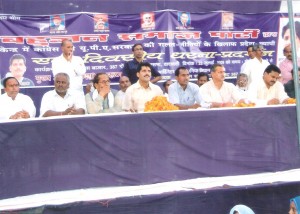 Mr. Pathak on the stage

I was thinking about Arun Pathak like any other Indian politician who do not have time for people after the elections are over but my impression about him completely wrong. I was able to arrange the meeting with Arun Pathak and I was seriously surprised to see how helping nature person he was. I went to interview him with Irene at least 20 times in 2 months and he was always so welcoming. He treated us very well and answered all of our questions. I got to learn about him a lot by interviewing him.

I was seriously surprised to listen his stories about his politics, style of protest and his struggles. Mr. Pathak’s family was very poor. His father worked at Jain Dharamshala in Varanasi as a store keeper. Pathak said that often times they did not have enough money to buy both meals everyday and they slept empty stomachs several times. He had to stop his studies and he was sent to his uncle’s house in the village only because the family could not afford to send him to the school. 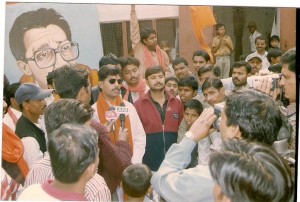 Mr. Pathak at a meeting

He returned to Varanasi only after a few months because his uncle also not nice to him. Finally Pathak joined municipality school (free schools but just waste of time) in Varanasi. During his schooling when he was only 14 years old, he went to a shop in his neighborhood asking for a job because he wanted to make some money to help his family. The shopkeeper laughed at him and said that he could employ a 14 year old student. Arun Pathak said that he wanted a part time job for evenings. 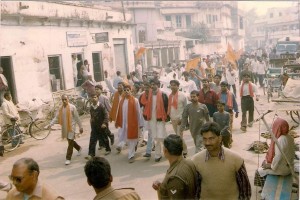 After so much request by Pathak, the shopkeeper agreed to have him as a part time employee. Pathak worked at his shop for one month and when he got his first salary, which was only Rs. 30, he was so happy to share it with his family. But when he was going back to his home with his salary, a few bullies stopped him and took his money. They asked him to buy them alcohol using the same money. After drinking alcohol they all went together and beat his family. Mr. Pathak says that his family was beaten up only because they were not able to pay the rent of their apartment on time. 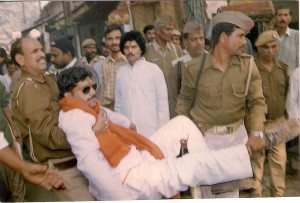 Those days a political party called Shiv Sena was very popular in India for working with youth. Shiv Sena has always been known for being a radical Hindu party. There was a rumor those days that Shiv Sena was providing a pistol to all of their new members and after hearing this Mr. Pathak also thought to join the Shiv Sena so that he could get a pistol to kill the people who had beaten his family. Since it was only a rumor, Mr. Pathak was never provided any pistol by Shiv Sena but Mr. Pathak proudly says he found nuclear bombs instead of pistols in Shiv Sena. 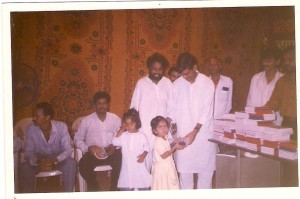 When talking about nuclear bombs he talks about the radical people of Shiv Sena. He says he had always led the life of a leader even during his school times and after joining Shiv Sena he again became popular because of leadership quality and so many people in his party became his fans who were ready to die or kill anyone for himself. He did so many programs organized under the banner of Shiv Sena and became so popular very soon. After 11 years of hard work he became district chief of Shiv Sena in the year 2000. 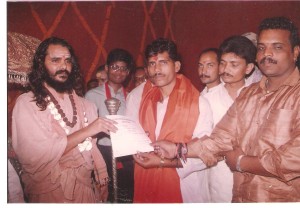 His protests were always huge and always became matter of conversation in the society. His protests against the movie Water, Girlfriend and Chori-Chori Chupke-Chupke was talked about all over the world. Shiv Sena has always been protesting against the Valentines Day celebration in India and he also organized huge protests against the festival in Varanasi. His protest against the liquor stores, corruption and several other things also got huge popularity. Very soon Mr. Pathak had became a very big name all over India. 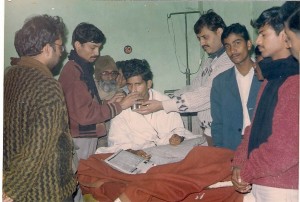 Mr. Pathak has always been known for his extreme way of protesting. He has consumed poison five times in order to protest. Once he cut veins of his right hand when he stopped from entering in a temple. When I asked Mr. Pathak about why he did such things, he laughs and says that nobody listens to the poor people. If you are poor and powerless then this is what you do to make people listen to you. He proudly says that he is the inventor of staging suicide as a form of protest. 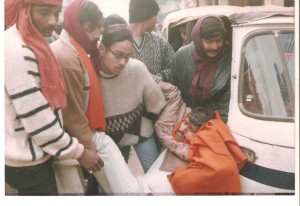 I had read so many articles about him and some of them said that the thing Mr. Pathak consumed was not basically poison and when I asked Mr. Pathak about it he showed me his palm which sweats all the time and he says that his body developed this problem ever since he consumed poison first time.  He showed me his medical prescription which says that he can not eat any heavy or spicy food, he has to drink filtered water and it all happened because of the affect of the poison he consumed several times. 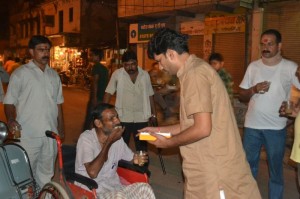 He says that it was not only himself who consumed poison but there were other people as well who consumed poison or tried to burn themselves only because he asked them to do so in order to protest. After saying this he called one of his workers named Bulli. Bulli is 29 years old and had consumed poison when he was only 14. He did it in order to protest against the movie Chor-Chori Chupke-Chupke. I asked Bulli several times when I met him alone about why did he consume poison and ever time his answer was same that he did not know. 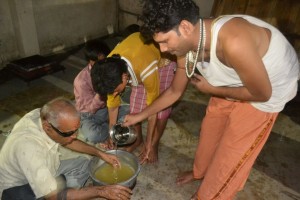 He always says that Mr. Pathak had asked him to consume poison so he did it. I asked him if he ever regret about it and says- why would I regret? It was Bhaiya’s order. He knows what is best for me. I was shocked to hear it. How come someone can have this big control over someone else? The bigger shock is people’s belief in Mr. Pathak. Anyways, he worked with Shiv Sena till 2003 and then left because he was not happy with the way Shiv Sena was discriminating against certain communities. 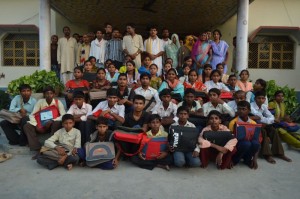 Actually Shiv Sena was beating the North Indians living in Maharastra and was kicking them out and Mr. Pathak was seriously hurt with the situation that he decided to leave the party. He formed his own political party and run it for four years. Finally in the year 2007 he realized that he needed a bigger platform to raise his voice and fight against big evils. Finally he joined Bahujan Samaj Party which is known for working with lower caste community and fighting against Mafias. 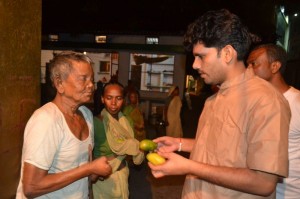 Again because of leadership quality he was appointed as co-coordinator for two state assembly seats in Varanasi. During his work period he made Bahujan Samaj Party very popular in Varanasi where there was no existence of Bahujan Samaj Party before. He has been kind of away from politics for the past one year and has been devoting his complete time in social service and religion. He says that he has been doing a research on the outcome of religious practices. To do it he has hired 11 priests who perform vedic yagyas everyday. 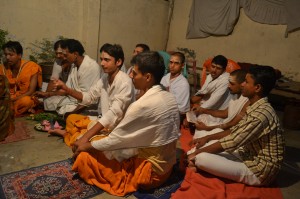 These yagayas including other rituals have been going on continuously since October 2010.  He says that he wants bring the truth in the society. If there is no outcome of such practices then people should not waste their time and if performing rituals really work then they should do it in right way. He believes that rituals do not really seem helpful nowadays because they were made thousands of years ago and now when the time has changed they also need to changed. And he wants to know this change. 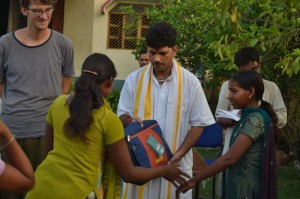 I have been to Mr. Pathak’s place several times and every time I go there I see people coming to him asking for help. He makes some kind of donation almost everyday. I have seen him offering food to the lepers, blind or physically challenged people. I have seen him paying poor students fee or buying them books. I have seen him paying for poor people weddings. I think he does all kind of donation possible. He never any new cloth until he donates the same to a few poor people. I still remember that once he bought 12 tracksuits. 11 were donated to the beggars on the street first and only then he wore one. 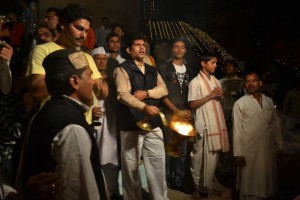 I have seen people running behind him, I am sure he thousands of fans only in Varanasi. He is like a star in Varanasi who is always surrounded by minimum of 6 security guards. He says that there is threat of life for him because there are so many people who do not like his popularity hence he needs security guards all the time with himself. After saying this he stops for a while and then said that can you imagine that I started working at the age of 14 because of my poor family background. He proudly says that his first salary was only Rs. 30 and now he has to spend good amount of money only on his security. 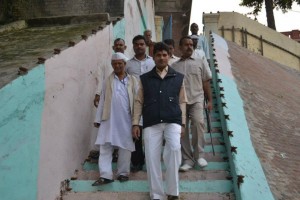 Mr. Pathak with his security guards

It is definitely a huge change for anyone and Mr. Pathak definitely deserves it. Now I have met Mr. Pathak several times and I like him a lot. I love his style of working, his devotion for his work, his understanding of the society and his super helpful nature. I am sure that I have also become his fan and would love to see him progressing in his life because I personally believe that he is a thousand time better leader and politician than anyone I have ever met. My society definitely needs people like him.