Nadia left Benares on the 20th. She stayed at my place for one month while she was doing research for her photo documentary called child of Ganga. We wandered together to different places in Varanasi along the river. We went to see all the sewage discharge place. It was an amazing experience to be with Nadia along the river. I really enjoyed my time and learnt a lot of new things and saw a lot of new places where the sewage is directly discharged to the river.

Nadia says that she had expected to finish her research in one month but it was nothing for her, obviously people say that even one life is not enough to understand Benares.  She plans to come back again next year and continue her research. Her documentary will be showed in university sometime in the  month of March, 2009. I am excited for it. I was curious if she would give credit to me in her documentary or not and when I asked Nadia about it, she said if she doesn’t then she will be sued.

She is supposed to write a book as well and I would like to see my name in this book. I think Nadia did something different than other researchers who come to Benares. Usually foreign researchers don’t know about the events which take place once or twice in a year like when people make a pilgrimage by going to all the major temples of Varanasi and finally drink the sewage water, actually it is not supposed to be the sewage water, they are supposed to drink the water from the place where the river Varun mixes with Ganga but in reality Varuna is nothing accept a sewage.

We were waiting for this event but could not make it because Nadia left early. I am very much excited for the book which Nadia is going to write. I could talk her much about what she thought after spending a month in Varanasi because Nadia was always busy. I hope to see her again in future and help in her research. 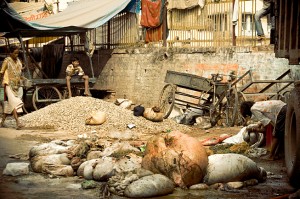 I have been watching something everyday which nobody would ever like to see. Its blood and meat everywhere in my city. There is a Muslim festival called Bakrid. Each and every Muslim family is supposed to slaughter on male goat. Sometimes they buy one for each member of the family. They slaughter the animal and throw all the waste on road. It takes at least four-five days for municipality to clean this up. There is a Discovery TV show called dirty jobs. I have watched that show sometimes but honestly the job they show is nothing in comparison with our municipality workers.

What part of body is this?

For these four-five days all the animal waste stays on road. People stop going to Muslim neighborhoods during these four-five days. I had seen it once about ten years ago and could not dare to go again towards Muslim neighborhoods during this festival. But this year I went specially to see it again with Nadia, a researcher from Singapore. First of all we decided to walk but right after crossing one neighborhood we decided to take a rickshaw because it was overwhelming to walk. There was goat skin, meat and other wastes all over the road. I wondered how other people were standing near all these wastes and talking to each other. It was just like daily routine for them.

It was also on the road

We took a rickshaw and passed by all the major Muslim neighborhoods in Varanasi. I saw the same thing everywhere- meat, goat skin, and blood. I saw one guy riding a camel as well. They entered in a Muslim neighborhood with this camel. I asked few locals about it and they all said that they were going to slaughter this camel as well. Wealthy people slaughter camels to show their wealth. Number of camels slaughtered is a news every year. I read in newspaper that ten camels were slaughtered only in Varanasi. 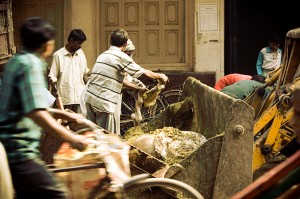 I don’t know what to say about this festival or whom to claim for this but definitely it is everybody responsibility to keep the sanitation. I think they must not throw animal waste on road. It spreads diseases and it looks so disgusting. I don’t think there could be anything worst than finding yourself in between all kind of meat. Nadia is also a Muslim but she had never seen or expected anything like that. She says that its completely hidden in Singapore. People never see any slaughtering even it is done in their name. 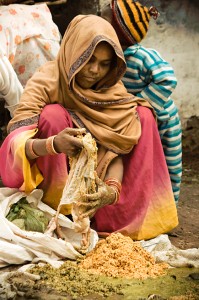 Nadia says that in Singapore they just pay the money to mosques and get a slaughtering done in their name. This idea is thousand time better than what we have. She started feeling sick after watching those tons of meat. I could not eat the day I watched it but it was still an experience for me and Nadia. There is very famous humor that selling meat is prohibited in Varanasi but the reality is something what I have talked about. Meat is everywhere:- in the shops, in the kitchens and sometimes on the road as well.

A student from Singpore is staying at my place. She had contacted me through couchsurfing. She just wanted to meet me. But when I saw that she was doing research about Ganga, I asked her if she would be my paying guest. She was also looking for home stay so she decided to rent my apartment. She is making a photo documentary called Son of Ganga which will be about people’s relation with Ganga in Benares. She says that it was her own personal research motivated by her father but when she informed her school about it and asked for leave, her school told her to do it with them.

She wanted to do her research with Sankat Mochan Foundation. She wrote them about twenty days ago but hasn’t got any response yet. I had already talked to her a lot about pollution in Ganga. I took her to a place where sewage is discharged directly, without treating, to the river. She was shocked to see the quantity of the sewer water. She said that she never thought that Ganga was this polluted. When I told her that there were more than 10 places like that in Benares alone, she just could not imagine it.

I showed her another point of sewage discharge near Shivala ghat and Assi ghat. Assi ghat sewage drain has a funny story. The Government spent a lot of money to divert this drain and mix it with Nagwa one so that people don’t see a direct sewage discharge. But now Assi ghat drain has started again. It again has a lot of sewer water that mixes with Ganga in front of people. I never understood why government spent that huge amount of money just to hide it. They could have spent the same money to built a small treatment plant.

There is an another river called Varuna in Varanasi which has become a complete drain now. The Hindi word for drain is ‘nala’ and this river is known as “Varuna Nala” by the locals. I never knew that Varuna River and Varuna Nala are samething. I just came to know about it few days ago. There is a religious walk called Antargrih where people start walking from Manikarnika ghat and cover all of Benares. One part of this walk is to walk along the Varuna River and do some rituals where it mixes with Ganga.

Most of the Muslim neighborhoods and slaughter houses are along the Varuna river. All the animal waste from more than ten-fifteen slaughter houses is dumped directly into the river. There is lots of sewage discharge also. Varuna River is the best place for criminals to throw murdered bodies because nobody wants to walk along this river. So it is not rare to find human bodies as well in this river. And it all mixes with Ganga after seven or eight kilometers.

This walk is sometime this month and I and Nadia have decided to do it. I have heard that people drink the Varuna’s water when it mixes with Ganga. They walk along the river, see all the waste mixing in it, human and animal bodies flowing in the river and a huge quantity of sewage discharge, but they still drink this same water just because of the religious reason.  I can not imagine what I will be seeing but I am so excited for it.