I worked with VPRO which is a broadcasting corporation from the Netherlands. They were making a travel show for children between eight to fourteen years of age group and my responsibility was to arrange everything for them including hotel, transportation, local assistants and choosing the right characters for the show. They just gave me an idea about the characters they were looking for and my responsibility was to do research, find the right characters and schedule appointments for interviews.  An employee of VPRO named Barbara Smith visited me a month before they wanted to start the filming. Since this show was a children show, they were looking for special children from Varanasi.

I asked them why they wanted to work in Varanasi only and they said they were really impressed by the cultural diversity of Varanasi and they could easily film the whole India only in Varanasi itself which was true. I also love the cultural diversity of Varanasi. Finding the characters they were looking for was a kind of challenge. At first I thought it would be easy but when I went talking with the kids and their families they all seemed suspicious about the work and because of this it was not easy at all to find the characters.

The characters of the show were really interesting. They were looking for a kid who practices Malkhamb, a bollywood kind of girl who comes from a rich family and has a dream to become either an actress or a model, a smart girl who comes from a poor family and was going to an NGO by some NGO’s support and a young couple. These four were the most demanded characters for the show and apart from it I was also responsible to find some other interesting characters. Once we were walking on the ghats and I saw a young snake charmer. I asked them if they would like to film him and they immediately agreed to work with him so a young snake charmer also became part of the show.

They already knew about an NGO called Saraswati Education Center which was basically a yoga school and an NGO running education program for poor kids. Barabara asked me to take her there so that she could arrange an appointment for filming when the crew arrives. I had not heard of this place before but when I reached I was surprised to see their work and meet with the owner named Sumit. He seemed like a nice guy and the NGO also seemed okay. We talked with Sumit and agreed to work with his school. But Barbara was not sure about them hence she did a random visit of the NGO and everything appeared to be fake. Sumit was saying that so many kids come to the school and they provide good education to the kids but in reality when Barbara arrived there she saw hardly 4-5 kids who were playing with a few hippies in the classroom.

Barabara said that nothing looked honest to her hence we decided to cancel the work with Saraswati Education Center. I had already introduced Dora and Attila to Barabara and she knew that they were also running an education program in Varanasi. She asked me if I could find a child from Chance India’s program which was not hard at all as I was also working with the same program and I knew all of the kids. We chose a girl and Barabara immediately decided to work with her. The biggest challenge was to find a Bollywood dancer girl because no family wanted their girl to appear dancing on a foreign TV show but fortunately I found a really nice girl in Varanasi whose parents were very nice and they allowed me to work with their daughter.

The film crew arrived after a month of Barabara did the research and we started filming the show. At the last moment they decided that they did not want to work with Malkhamb boy as it was not a very traditional practice. They asked me to find a kid who goes to Akhada, There was an Akhada nearby Assi so it was no problem to arrange filming there. I gave them a few walking tours of Varanasi and introduced them to a few cool characters of Varanasi. They filmed Varanasi city, cows, cow-dung on the street, Sadhus… We worked together for five days and completed the project successfully. The crew seemed happy and said that they came to Varanasi to produce one show but they had got enough material to produce two TV shows which was a compliment for me and I was so happy with it.

After completing the show we had a party at the Radission hotel in Varanasi. It was the evening before the crew was going to leave India and they got a call that the producer of a commercial, which they had filmed in Rajasthan on their own, did not like the work hence they needed to film it again. They asked me to arrange filming to a girl from rural area urgently. Fortunately I was able to arrange it for them on the way to the airport next morning. Everything was done happily and show would be on TV in February 2012 and I am so excited to watch it. 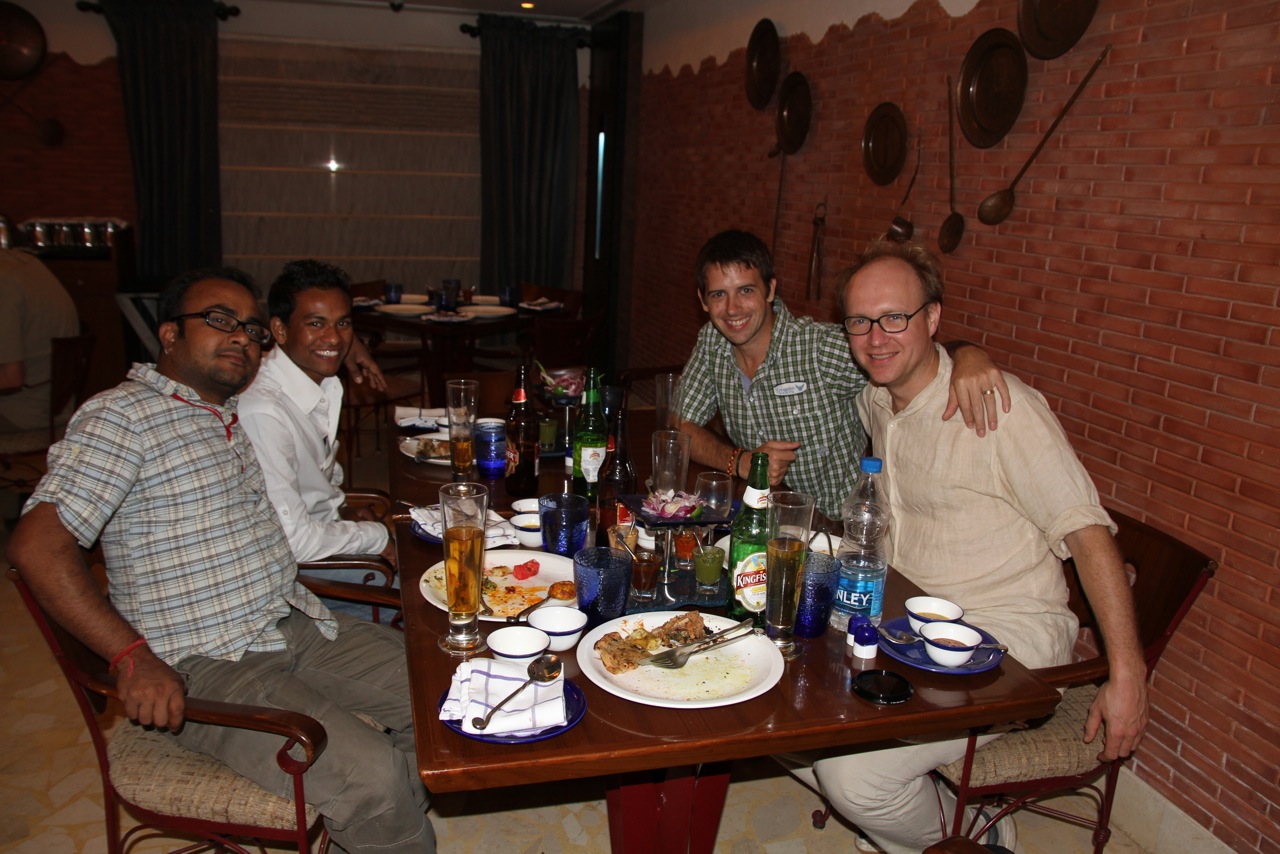 Crew members and I at the party after finishing the project

I worked with a journalist named Bart Spellers from Holland who was writing an article about the Coke issue in India. He wanted to visit all the disputed Coke sites in India including Mehdiganj, Varanasi and I worked with him in Varanasi as his local assistant and translator. I also look for an opportunity of visiting Mehdiganj and talking with people about their problems created by Coke so I was happy to get this job. I took Bart to Mehdiganj, arranged interviews with Nandlal Master, a few employees, the union leader at the Coke plant, a few women and a few farmers. Bart did not want so many interviews but he wanted to talk with the right kind of people because he did not have much time for Benares.

I was kind of surprised to hear that he did not have much time for his work. He was writing the article on a very controversial subject and I think he should have spent more time in Benares in order to come closer to the fact. Anyways, I think they did good job because they talked with few but the right kind of people. I had an idea but was surprised to talk with the people in Mehndiganj. I was very well aware of the situation but thought it might get better this year but after talking with the people I realized that the situation is still the same as it was four years ago when I went there the first time to work.

All of the people were still angry at Coke and the government. They all said that Coke is responsible for the lack of water in Mehdiganj and the government is doing nothing against Coke. They said that the situation has been getting worse and worse year by year which did not surprise me at all. We had less than average rain last year and I heard that Coke’s market increased within the past year in India which would of course cause more ground water shortage. Nandlal Master said that the committee constituted by the prime minister of India to study the issue has submitted its report to the PMO but has not made it public yet which sounded strange to me.

Why not make the report public since the study has been completed? Nandlal said that he has used a RTI to ask when the report will be given to him and the concerned department replied to him that they have asked the district magistrate to get him the report. It is okay if they are going to provide the report but I still do not understand why they tried to hide it? Why was it not given to the media? After all it is a big issue . So many questions again and the government and Coke both seem suspicious to me. Hopefully someday something will happen, but it is not sure when.