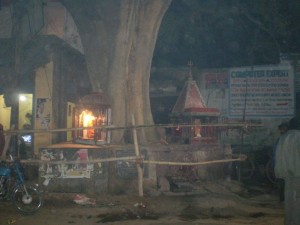 There is a Muslim’s festival tomorrow called Muharram . Right before a night of this festival Muslims do a parade in the night starting from different mosques in the city where most of the male Muslims run on the road and beat their chest. By beating their chest they show their sadness. They say that right before one night of this festival, one of their Gods had died. I always watch this parade and enjoy it as I have very much respect for their feelings, festival, culture and religion. All the parades have a horse which is completely decorated by flowers. People take these flowers as blessings. I also take one flower every year.

This year I noticed something very strange. Yesterday I saw some municipality workers covering all the Hindu temples on road by bamboos in my neighborhood. I did not understand why they were doing it. I asked them and they said that since it was the parade that night they wanted to make all the temples secured. I did not understand why Hindu temples are not secured on the parade night and they said that Muslims can harm Hindu temples. I had heard about it but never thought that it was true. I have seen their parade and to be honest they really look like in violent mood.

There are always a lot of Police, Rapid Action Force and other security guards for their parade. I have heard that they used to kill people while the parade. I don’t know if it is true or not but after watching the barriers around Hindu temple, it makes me think like maybe the things I had heard about this festival was true. Varanasi is famous for its Ganga-Jamuni culture. Ganga represents Hindus and Jamuna represents Muslims in this expression. It is said that Hindus and Muslims are very friendly in Varanasi but is it the kind of friendship we have? I am sure that Ganga-Jamuni culture doesn’t exist anymore. We had big tension after Babri mosque was destroyed in Ayodhya and that tension is still there, maybe it is hided but it is still there. 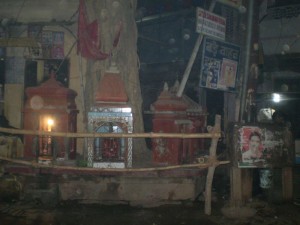 Another temple barricaded by bamboos at Assi crossing

It is not an big issue for me to see the God in prison, after all Krishna was also born in prison, but it doesn’t look good to make an effort to save the temples. How is it possible that the government or the people are afraid that the temples will be destroyed? It is India where more than eighty percent of the population is Hindu and we have to make an effort to save our culture? Its not something that needs to be taken care of. It is only the impact of Indian government making Muslims feel powerful than Hindus in India only for the vote bank. Now Muslims feel so powerful and think that they can do anything, even destroy temples.

Last year on the 6th of December, the anniversary of demolish of Babri mosque, all the Muslims had closed their shops in Varanasi to protest. They did sitting in front of city office demanding Indian government to built the mosque again. Even though they also know that there was a temple before mosque but still they want to get the mosque back. A group of Muslims protested in front of Indian parliament in Delhi putting the same demand- built the mosque. This case is pending in supreme court of India for the last fifteen years and I don’t think that it will be ever solved because Indian government doesn’t want to hurt Muslims. I think they must built either the temple or the mosque as soon as possible. But please do not keep this case in Supreme court anymore.

People often get violent against each other. I remember once about seven-eight years ago when Muslims had murdered a Hindu guy. They were protesting against something and had blocked the road. A Hindu guy was coming back to home from work and Muslims stopped him and murdered him on the main road. This guy was newly married. His wife was so unlucky because she will have to live as a widow maybe for her whole life. I don’t know what to say about these things but it is very painful to see people fighting for religion.  And I am sure that these kinds of issue could never ever be solved. 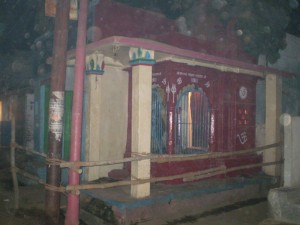 People  say that the tension between Hindus and Muslims is because of religion, but I don’t believe it. I think our government is completely responsible it. Our government educates people for not doing any kind of discrimination between boys and girls but the same government is doing discrimination between Hindus and Muslims which is a big issue for every India whether they are Hindus or Muslims. Muslims are given subsidy when they make a pilgrimage to Makka but why not Hindus are given help of a single rupee when they make any pilgrimage? Why Muslims are considered as a minority group and given special facilities in few states when Hindus are not considered as a minority in Jammu and Kashmir?

This kind of discrimination always creates tension in any kind of society. I believe that it is always good to talk about similarity because if we talk about similarity between two people then it makes them feel like there is something common between them and it brings them closer but our government always talks about differences and promote people who can talk about differences. There is a Indian guy named Mr. Zakir Nayak. I think he is dangerous than a terrorist. I believe that human tongue could be more dangerous than a nuclear bomb if it is used properly and Mr. Nayak knows how to use the tongue.

He has amazing knowledge of all the religions and he organizes religious lectures and talks about differences between Islam and other religions. I have heard his conferences on TV and I see how he invites religious leaders of different religion and talks them about the differences. Most of the listeners in the conference, maybe more than 99%, are usually Muslims and they all like to hear him and clap after he proves that Islam is greater than other religions. I see him as Laden of India. There is only one difference between Laden and Mr. Nayak which is Laden works by guns and he works by tongue. He still organizes conferences and making people violent which will blast like a nuclear bomb someday.

Indian government seems okay to put the God in prison but they don’t like putting the terrorists like Zakir Nayak and a lot of other religious leaders, who make people fight for religion, in jail. I am not sad to see the temples in barriers but I am not happy either. It should not be done. It makes me feel like our government is afraid of Muslims and Muslims feel like they can do anything, even hurt others feelings and culture. I can bet that this problem will never ever be solved until there is any kind of discrimination between Hindus and Muslims and I am sure about one thing that this discrimination is not going to end soon. I used to see the god in prison only once in a year, on Krishna’s birthday when people and temples organize play of Krishna’s birthday but now I will see it twice a year. No problem. But I am not happy.