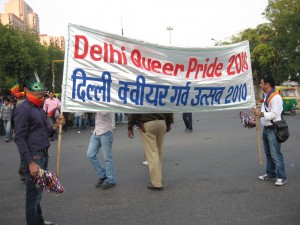 Delhi celebrated its Gay pride parade this year on 28th of November and I again went to attend it. They used to organize it in the month of June until last year but this year the date was changed because Delhi gets horribly hot during the month of June. I also feel that it was a nice decision. This year was important for me as it was Delhi’s first biggest gay event after decriminalization of section 377and I wanted to see the reaction of people. This year I went to the parade with my friend Babu. Later Ravikant also joined me who was me in Delhi for some personal business. 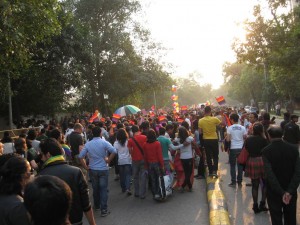 I had already been to so many gay parades taking place in India hence nothing was surprising for me but Babu and Ravi were just shocked. They had no idea of what was going on. Anyways, the parade started from Barakhambha road and ended at Jantar Mantar which was around 2 hours of walk. When I arrived at Barakhambha, there were already a few hundred people. A lot of them were dressing up, a few people were distributing masks, pamphlets and candies. I have noticed one thing that Delhi pride has always a good number of Hijras. 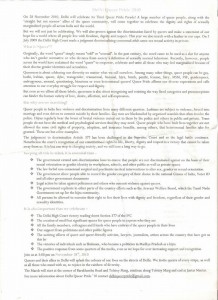 The parade seemed way bigger than the last year and it was more diverse as well. There were all kinds of people- families, Hijras, LGBT community people, students, straights… The parade started with dancing, music, slogans… and very soon hundreds of more people joined in. The paraded was guarded with hundreds of police who would sometimes stop the traffic as well so that the parade could pass easily.  The parade lasted for about three hours and it was just like any other gay pride parade in India which was a blender of modernity and tradition. A few groups were dressed traditionally and a few people looked very very modern. The parade had a huge support of students. There were a lot of young people in the parade. 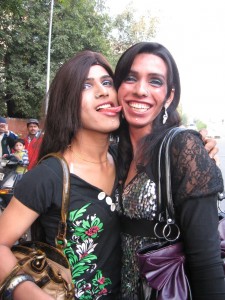 The parade finally arrived at its destination- Jantar Mantar where they had a few speeches of social workers, organizers and participants. A huge organization called NAPM also joined the parade this year and they announced that they are also with the LGBT community in India and would fight for them. NAPM is a huge organization working of several different issues all over India and if they also support LGBT community activity then I am sure it could bring a huge change in the society. I have been working with one of the state conveyors of NAPM in UP named Nandlal Master for a long time so it was good to see that NAPM also got involved. It was a good news because I have already been planning to organize a gay pride parade in Varanasi and if NAPM supports it then it could be a big help for me. 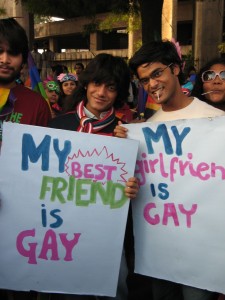 All the speeches happened and people talked about different issues but mostly people talked about how they are discriminated in the society. A few people came on the state with masks over their face but after arriving on the stage, they took off their mask and said that they were feeling so confident after attending the parade and now did not want to hide their identity and sexuality anymore. Finally they had a candle lighting program which ended the parade for this year. I was told that there would a party after the parade and I was so excited for it. I had already attended a few post parade parties and I really loved them. Somebody told me that since the number of participants increased in the parade, they have organized parties at several different places. Some of them were paid and some were free. 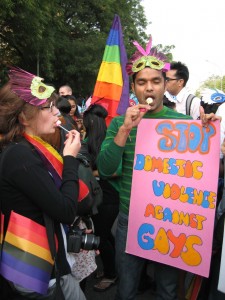 I asked about it to a few people and they gave me several different addresses which means this year the parade was bigger and they needed more than one place to host the party. I went back home, got ready and left again for the party. I went to a club near to Qutubminar. But after arriving there we realized that only those people were allowed who had some kind of SMS on their mobile sent by the organizing committee. I told the security guard that I came all the way from Varanasi and I had already talked with the organizers and I was actually invited to attend the party but still they were not allowing me. The system was completely different last time when I attend the parade. Last year anyone was allowed to attend the party and there was no restriction at all. 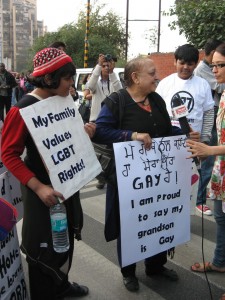 It was very disturbing and frustrating. Finally I met one of the organizers on the street near the club and I asked him to me. He called someone who was inside the club to pick me up. This guy showed up at the entrance and brought me in. The club was fantastic and they had a party on the rooftop with music, drinks and food. Everything was super expensive. They were serving a small bottle of beer for Rs. 600 which is usually available in the market for Rs. 50. One small shot of cheapest whiskey they had costed Rs. 600. Anyways, I bought a few drinks and was basically enjoying the party. My friends also enjoyed the party a lot. I could easily see how shocked they were but at the same time it was a interesting time for them, especially for Ravikant. 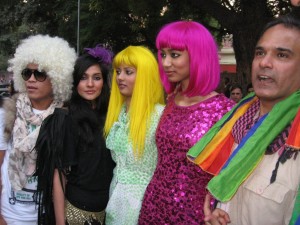 Suddenly police showed up and asked the DJ to stop the music. Actually its not allowed to play loud music after 10 PM at public places anywhere in India. The organizers tried to settle the police but these guys did not want to hear anything. Finally party was stopped and we were asked to move out of the club immediately. I was kind of disappointed because post pride parties are different than regular parties, are so much fun and I enjoy them a lot but this time I could not.  But I do not regret at all, I was happy that at least I got to attend the parade. It was a nice experience and I got to learn a lot. Hope to attend Delhi pride again next year.

Please click here for more pictures of the pride parade-