According to Hindu Mythology there should be four parts of life, called as Ashrams. The four ashrams are- Vidyarthi, Grihastha, Vanprasth, and Sanyasa. Vidyarthi ashram is the students life which ends after age of 25. People can still be student after Vidyarthi ashram, but they should get married after 25. Grihastha ashram starts 26 and ends at the age of 50. During this period people should get married and have a family. Vanprastha is life between 50 and 75. This is the time when people are supposed to prepare themselves for Sanyasa.

During Vanprastha time people are supposed to get rid of their responsibilities like get their daughters married, help their son to become self dependent. During the same period people should prepare themselves for Sanyasa by start meditating, and doing rituals. Sanyasa start at the age of 76 and lasts until a person dies. People have to perform certain rituals to enter in Sanyasa life. Sanyasis never stay at home. There are monasteries in every Indian city where they can live for free of cast. 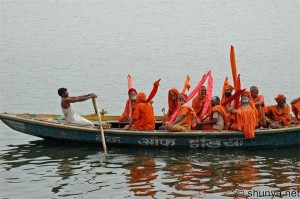 Sadhus at the river Ganga

After entering in Sanyasa life people are called Sanyasi. People have to perform a lot o rituals be become Sanyasi. The most important one is to get rid of their body. They stand nude in the river and read some mantras, and by doing this they get rid of their body. They perform all the sacrament that is done after a person does during their lives time. So even though they are alive but their Terahi is done. This is the reason why body of Sanyasis are never cremated, their bodies are always drowned in the river.

They always beg for food, and wash the food before eating it so that they can get rid of the taste. They always wear a orange dress because orange is the color of Hinduism. Sanyasis who are Bramhan by caste carry a stick all the time with them. They get this stick when they enter in Sanyasa life, and this stick is drowned with their body when they die. No other caste than Bramhans get this stick. This stick is very important for Sanyasis. It is also rapped with orange color cloth.

Usually Sanyasis live in monasteries with other Sanyasis. They spend most of their time just repeating the name of lord Ram. Sometimes their famiily also visits them, but usually they spend their time alone. I have talked to many many Sanyasis while working with researchers, and everything that they told me was surprising for me. Everybody was so happy to say that they were waiting for their death. They say that they repeat the name of lord Ram and tell him to give them death as soon as possible.

Once I was talking to a 70 years old woman who had been living in a monastery for the last 30 years just waiting for the death. This was the first time when I was talking to a female Sanyasi. She said that females don’t go through all the rituals that are done for males. They just leave the family, dress like Sanyain and start living in the monasteries like Sanyasin.They also follow all the same rules as males do. They live in the same monasteries but all the monasteries have a separate section for females.

The woman I was talking to was not a Sanyain. She came to Beanres 30 years ago with her husband. Her husband had TB, which was kind of untreated disease about 30 years ago. When he got TB, he decided to come Varanasi and live last part of his life. A lot of monasteries have a separate section for family people. So if someone who does not want to become a Sanyasi can also live in the monastery by giving a certain amount which covers their room rent until they die.

Her husband died after living for 3 years. But she was still in the same monastery just repeating the name of lord Ram, and praying him to give death. She said that her family visits her once in a year for one week. I was kind of not comfortable asking someone about their death, but she was so happy to answer all the  questions. She said she came to Varanasi to die and it will be happiest moment of her life when she gets it. When we asked her about was she sad when her husband died, and she said that she was so happy because her husband got was he was looking for only within 3 years.

We talked to a male Sadhu also who was about 70 years old, and had taken Sanyasa when he was only 35. He took Sanyasa because his parents died early, and he was cheated by his brothers. So he was sad and decided to become Sanyasi. The women we talked to seemed so healthy and it didnt look like she was going to die soon, but this male Sanyasi was really sick and maybe would die soon. He was also so happy to talk about his death. I wonder how someone could be happy talking about their death.

We met one Sanyasi who took Sanyasa to escape from the police. He had murdered at least 10 people and when administration ordered police to kill him, he left his village, came to Varanasi and became Sanyasi. He had been living in Varanasi as Sanyasi for the past 15 years. He family often visits him, give him money and he had kind of family life. He had sweets which he gave us. I am sure he had lots of money. He also admitted that he never wanted to become a Sanyasi, but the police compelled him to become a Sanyasi.

So I met a lot of different kind of people who had accepted Sanyasa. Most of them were just waiting for death and wanted to die as soon as possible. They say that God don’t give death if you have done sin in your lifetime. So being alive as a Sanyasi was a kind of punishment for them. Hinduism says that family life is the best life, better than Sanyasa. I think we have an very famous idea of Sanyasa, and when people feel lonely like after their wives death they want to become Sanyasi or some people just want to die living as a Sanyasi so that their soul could get liberated.

The number of Sanyasis have decreased a lot in recent past years. But Varanasi has still a lot of Sanyasis. Usually people leave their home town and go to other cities to live, but Varanasi is the only place on the planet where people come to die.