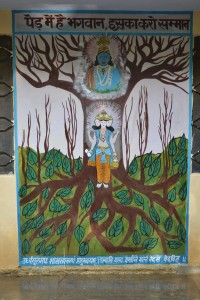 wall paintings at the TBS office

I got this really special opportunity to visit Tarun Bharat Sanghand get a training about environment, especially rivers, personally from Mr. Rajendra Singh. Mr. Rajendra Singh who is one of the members of Ganga Basin Authority is involved in Coca-Cola issue in Varanasi as well and my colleague Mr. Nandlal Master is the main leader behind Coke movement in Varanasi. Nandlal Master told me that Mr. Singh was not happy with the way government of India was dealing with Ganga. He was demanding for a river policy and community involvement in the program and wanted to encourage people to think about it and ask the government for same. I also believe in the community involvement in non-profit projects. 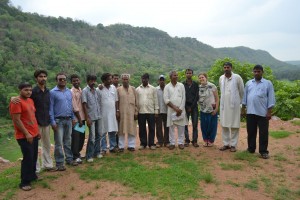 our whole group at a work site of TBS 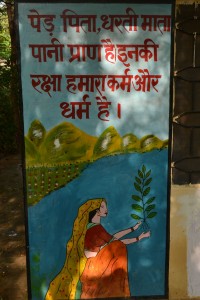 Tarun Bharat Sangh provided us fund to buy the train tickets and arranged our lodging and fooding at their NGO. Mr. Singh was not present at the office the day we arrived there but he had given the responsibility of training us to the General Secretary of TBS Mr. Kanhaiya Lal Gurjar. Our training included class room teaching and site visit both. In the first session on the first day we were introduced about the TBS, the local area, the people and some other general things. They especially focused on how they were able to make five dead rivers alive again only by educating community about traditional knowledge of ecology of rivers and right usage of water. It was really interesting to see how they had great belief in the traditional knowledge and the way people used to behave with their enviornment. 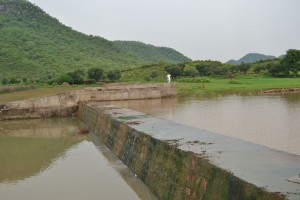 Mr. Kanahaiya told us that all the five dead rivers went dead because community had forgotten its own knowledge of ecology and had become completely dependent on the government. He said that one of the biggest reasons behind their success was community’s active involvement in all of their projects. Actually they built several small dams called “Johad” on several rivers so that at least water stays in the river always asked the community to spend 25% of the costing. They always had enough money to fund the entire project but they always wanted the community to feel their responsibility and to make them responsible, using their money seemed best idea to them. 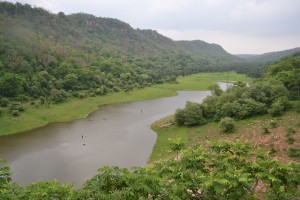 This river has water all year long

They built several small dams one after each other on all of the rivers they worked on. Mr Gurjar said that these small dams are good because they recharge the ground water which means that people who are not living close to the river will also have access to water through their wells. Mr. Singh they got huge community support when people started getting water in their dried wells. A lot of people from far away villages came to TBS asking to built such small dams on the rivers which were close to their villages. 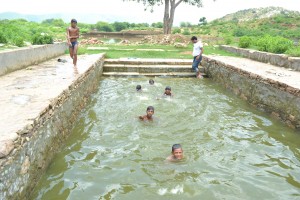 I also believe the same and have used the same system in Chance India Program as well and it worked very well. Anyways, they built all those small dams but it was a huge challenge for them because they did not have good maps of the area so they had to do the mapping first. They really needed good maps because building dams just anywhere was not going to solve their problems. They had to do huge data collection of almost everything such as ponds, wells, canals and everything. And based on the data they made a plan and implemented it. 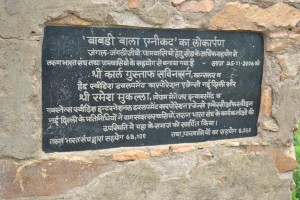 He said that in the ancient time people were more aware about usage of water and they had a simple but good way of calculating the quantity of water they used. He said that in the ancient time people would take the water out of the wells for irrigation depending on the rain fall they had. If there was less rain fall then they would take less water out of their wells but now there is no such system. Now people have starting growing crops like rice which needs a lot of water and government has no control or any program to educate people. 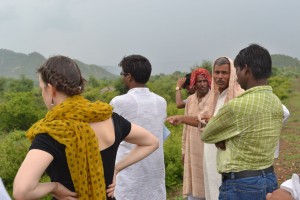 Anyways, it was really good getting training from Mr. Gurjar. He was really knowledgeable person. He took us on site visits for three days and showed us their work. We were shocked to see their work. It was just awesome. All of the rivers had water and quality of water way better than Ganga or a lot of big rivers I had seen before. Mr. Gurjar took us to places which there was no human living but they still had their projects there. There were several places where there was no access of any road but they still had their Johad built there. It was just awesome work.

Mr. Gurjar explaining a site to us- 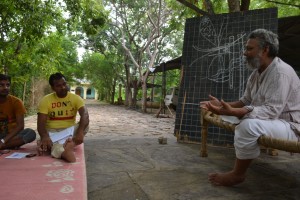 Finally Mr. Singh arrived back to the office and we had two days of training with him. The first session of the first day with him was about eco system of rivers. This class was just like a blessing for me, I felt so informed after finishing the class. Second session was about Ganga and a river policy which Mr. Singh was working on. Mr. Singh was just super knowledgeable. He told us about things which are not easy to find any books or journal. He told us about the complete basin area of Ganga. He had names of all of the subsidiarity rivers of Ganga in his mind and he knew about all of them very well. 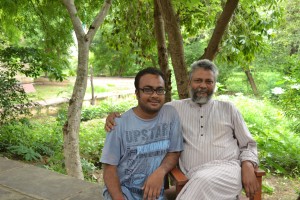 Mr. Singh and I

We had several hours of classes with him and it was always an amazing experience of learning. I was really impressed with his knowledge of rivers, his belief in the community involvement and using science and traditional knowledge of Indian society to solve the problem of Ganga. He said that the Government of India won’t be able to clean the river until there is a river policy and the government works honestly on it. He had already made a river policy by taking suggestions by thousands of people from all over India and wanted to share it with us. 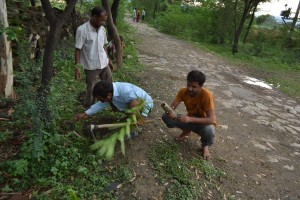 He wanted our suggestion as well. We read the whole document in front of him and had a discussion about it. The policy was really big but he was really nice answering all of the questions we raised. The policy covered almost anything anyone can ever imagine about Ganga. It was just awesome. During the training we did plantation also at the NGO office campus. The office campus was huge with a lot of trees. We did plantation together with Mr. Singh and Gurjar and planted over 300 plants. It was a really nice experience.

After attending the training at TBS for five days we all felt so informed about the ecology of rivers, especially Ganga and this will help me a lot in future. I definitely would like to work again with Mr. Singh and if possible visit TBS again for more training. 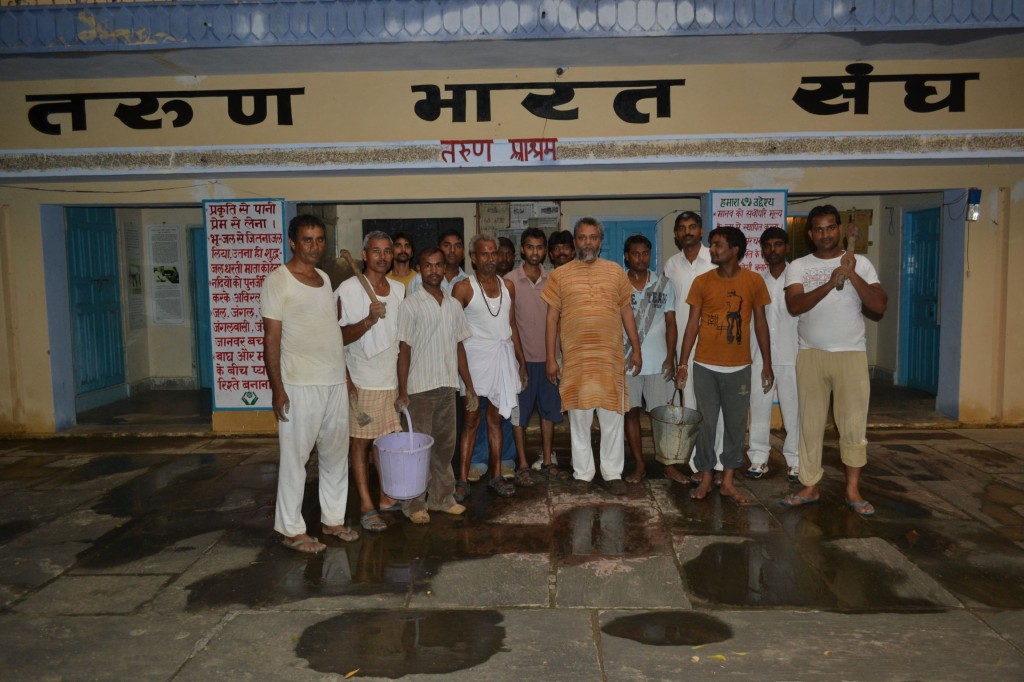 My whole group with Mr. Singh after plantation