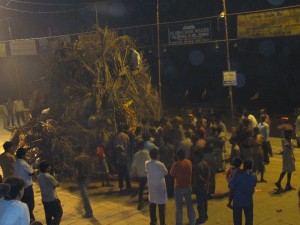 Holika is a festival which is celebrated on Holi eve. It was on the 28th of Feb. this year but I could not attend it. This festival has a very interesting story behind it. It is said that there were two brothers named Hiranyakashyapu and Hirnakchya. Both of them were evil souls and were always just fighting and were killing religious people. Finally Lord Vishnu killed Hirnakchya and since then he became the biggest enemy of Hiranyakashyaup. After sometimes Hiranyakashup did meditation and made Lord Vishnu happy. Lord Vishnu appeared in front of Hirnyakashyapu and asked him to make a wish. 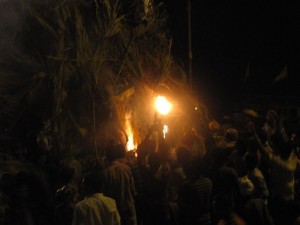 Hirnyakashyapu asked for immortality but Lord Vishnu said that whoever has born, has to die for sure and then Lord Vishnu asked to make some other wish and and then Hirnyakashyapu did something really smart. He asked for a condition where neither a human or an animal could kill him, neither in the day nor in the night, neither on the earth nor in the sky… and finally he was granted this boon by Lord Vishnu. After being granted this boon, he started taking advantage of it. He started harassing innocent people, prohibited religious practices, declared himself as a God… 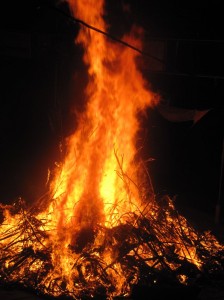 Prahlad’s aunt whose name was Holika had a boon that she would never be affected by fire so she offered her brother, Hirnyakashyapu, to help him killing Pralahad. Hirnyakashyapu agreed for it and they setup a wood pyre to burn Prahlad alive. Holika sat on the wood pyre with Prahlad hoping that Prahlad would die and she would not be affected by fire at all but some miracle happened Holika burnt alive and died and nothing happened to Prahlad. Now people celebrate this festival on the Holi eve. People setup wood pyre and put a statue of Holika and Prahalad and burn it.

On the festival day, people make mustard paste and rub it over their body. After rubbing the mustard paste whatever the waste comes, is put into the wood pyre. The idea behind it is that people get rid of their sin and get a fresh body and soul. But this festival has become an environmental issue now because people cut green trees and burn it. It was the first time this year when I saw a group of student educating people about not cutting green trees for the festival. I also believe that this should not happen but I am sure it is not going to stop soon.

Benares is already in lack of greenery and not only Benares but the whole world is talking about this issue. I have heard that Chinese cut over 25 million trees every year just to make chopsticks. India has also cut over 75% of its jungles. I do not understand what will happen in future if such practices continue. I hope someday people will understand the issue and change such practices. I know that education and awareness about the issue is the only key to stop such practices but don’t know who will bring this change. I know that we can not stop this festival but we can replace green trees by other wastes so please stop cutting trees and plant new ones.