Mumbai, the place of most happening Gay events in India hosted its gay pride march on 29th of January and I went to attend it. The parade was organized by Humsafar Trust which is the biggest organization working on LGBT rights in Maharastra. They used to celebrate the pride on 16th of August every year but this year date was changed because of hot weather conditions in Mumbai in the month of August. They used to celebrate pride on the 16th because they believe that India got independence on the 15th of August 1947 but the gay community in India never got independence hence they started celebrating pride on the next day of independence day.

Celina Jaitely at the parade

I had already been to the Mumbai pride parade in 2009 so I also felt that it was good decision to change the date. Anyways, the parade started from the same place where it started last year- Azad Maidan and ended at Girgaum Chowpatty. It was like 5-6 Kms walk. At least a few hundred people had already gathered before I arrived at Azad Maidan and they had speeches going on. Only after a few minutes Celina Jaitely, a very famous Bollywood actress, arrived which brought extra energy amongst the participants. Celina has always been interested in LGBT issues and has been supporting the NGOs working on it. Once she admitted that her ex-boyfriend was a homosexual. She is one of the biggest names working on LGBT issues in India. I have seen her several interviews on TV and newspapers where she talks about equal rights for LGBT community.  I had seen her in 2009 parade as well. It is nice that such celebrities participate in the pride event.

After a speech from Celina and other social activists the parade finally started. I saw something new this year that Humsafar Trust opened India’s first LGBT friendly store in Mumbai and they were advertising it in the parade. The shop is called Azaad Bazaar means independent store in Hindi. The liked the idea of having a special place for LGBT community because there is huge discrimination against them in India, they are made fun of. They do not feel comfortable just everywhere. And if there are such places like Azaad Bazaar then the LGBT community people could go shopping freely and meet up. In fact such places could bring change into the society because they are 365 days an year advertisement place. They are visible places and if straight community people see it then at least they would talk about it for sure and I always believe that communication can solve a lot of problems. 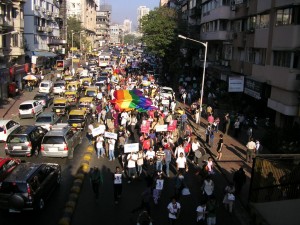 The parade started with at least 1500 people but soon it turned into a happy parade event of at least 2500-3000 people. The entire road was full of participants dancing and cheering up. There were people from many different places, even foreign countries.This year parade was also mix of tradition and modern culture. I got to see the most modern looking people in whole India and at the same time there were so many groups who had dressed very traditionally and were performing traditional dances and were singing traditional songs.

I had once asked an officer at the Humsafar Trust about why there were so many people dressed very traditionally and he said that it is done intentionally so that Mumbai pride parade doesn’t become completely western and it is always easier to get acceptance if local culture in involved in it. And since India has the oldest gay culture in the whole world, it is always nice to mix the gay events with traditions and culture. I loved this idea. Anyways, the parade was full of joy, happiness and freedom. I saw less people wearing masks this year which clearly means that the LGBT community in Mumbai is becoming open and is fighting for their rights. Laxmi Narayan Tripathi, a famous Hijra social activist, also joined the parade. She is just awesome. I have already met her several times, interviewed her and I like her a lot. I think she is the most famous Hijra in the whole world.

I was noticing a person for a while but did not know who he was. He was dressed like a king and I had seen him in 2009 parade also. I asked a friend and he said that he belonged to a royal family from Gujrat and was an open gay. His name was Manvendra Singh Gohil. After he revealed his homosexuality, there was some tension in the royal family and he finally started working with LGBT community in India. He started his work first with the LGBT community in Gujrat. He has in fact announced that he would adopt a child. It was nice to see big names coming out in the society and accepting their sexuality and demanding for equal rights. It was especially nice of Mr. Gohil because he comes from a royal family in India and royal families are very important for the society. If they make any changes then the society accepts it easily the same way change in the caste system along with a lot of other changes were accepted without any question.

I also noticed more family support this year. I saw a few people with writings like I am proud of my gay son or grand son. I saw a writing saying proud of my gay brother. I am sure that the people who are proud of their gay family members are not even one percent in number but I see the change, more and more people are accepting LGBT community. The parade finally ended at the Girgaum Chowpaty with a few speeches from social activists demanding for equal rights for LGBT community. India has already legalized gay sex practices and now they are demanding for legalizing gay marriages and equal rights. I am not sure if the situation is going to change soon. Doesn’t matter whether government allows gay marriages or not or whether they promise equal rights or not but society is not going to change soon. I have not personally seen any change in the ideas for LGBT community amongst the people of India.

But the good thing is that at least people have started talking about it. I see more open gay couples in the society which is a clear indication of change. But I think LGBT community is also a little bit responsible for discrimination amongst them. Sometimes they do strange things like I saw a couple of people opening their pants and showing their genitalia to the people. They were kissing each other on the main road which is not seen in India. I am not against the idea of kissing each other but I believe that if such thing is not practiced in India openly on the road then they should also not do this.

They won’t become part of the mainstream society until they start acting like mainstream. I believe that human feeling is same doesn’t matter whether they are gay or straight but there are some social rules and everyone should follow it. Anyways, it was good to attend the parade learn more about the community. I plan to attend the parade next year as well with a better camera. I could not make videos or interview people this year but next year I will definitely come up with more digital records of the event. 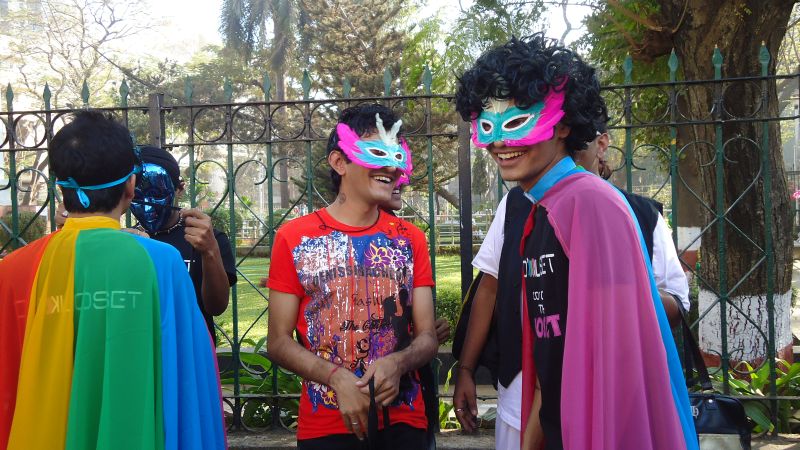 Happy Ending of the Parade

Please click here for more pictures of the pride parade-