I worked with a photographer named Jane Becker from Canada. She wanted to photograph widows and hospices in Varanasi. Since I had already worked with a researcher from the University of Venice who did research about widows in Varanasi, I already knew where to take them. About two years ago I worked with a researcher from the University of Berlin who was interested in people who come Benares to die so I had some idea about this subject also. We decided to start working with hospices and ashrams first. I took her to an ashram near Assi ghat and we interviewed a few people and she did some photography also.

Next day I took her to another ashram where more than 2,000 people stay to live their last part of life. This ashram has a section for Sanyasis and a separate section for family people. The ashram was huge with so many people in there and there was a school also for Sanskrit studies. We visited this ashram but did not photograph. The next day we went to a place called Kashi Mukti Bhawan which really different than other places in Benares. Benares has so many places and ashrams where people stay to die but this place was entirely different.

They do not allow anyone who is below 60 years old or looks like they are not dying. The building has ten rooms and when I went there only one room had people and the rest of the rooms were vacant. They have a temple also inside the building where they have puja going on most of the time. The manager said that until four years ago they did puja 24 hours a day but they decreased by a few hours because not many people come anymore. In the past all the rooms used to be full all the time but now sometimes they have only one visitor, sometimes two or three and sometimes just no one.

She also talked about the importance of dying in Varanasi but at the same time she gave some importance to Kashi Mukti Bhawan also. She said that Kashi Mukti Bhawan has an ideal atmosphere for dying. She said that Kashi Mukti Bhawan has chanting all day long and the priests read Ram Charit Manas for the dying person which makes it a special place for dying. We asked the manager why they allow only 14 days of stay and he said that 14 days are enough to die. In case the person is still sick and feels like they are going to die even after 14 days, they allow them to stay for a week or two more but usually people die within a week.

The manager said that in some cases people came and returned home by recovering from their sickness. So they came to Kashi Mukti Bhawan with serious sickness and felt like dying but they recovered and did not die. Well, in any case Kashi Mukti Bhawan seemed different than most of the other ashrams in Varanasi and I would like to learn more about it. 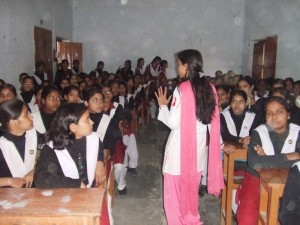 We organized a workshop at Gopi Radha Girls School in Varanasi where Sanjeevani Booti’s social workers and volunteers did a presentation about HIV and AIDS. We had been thinking of it for a long time and it finally became true. We did presentations for the 9th and 11th class girls. We wanted to do it for 9th, 10th, 11th and 12th class but school did not permit us to do a presentation for 10th and 12th class girls because their exams are going to start soon. We did the presentation for 11th class on the 11th and for 9th class on the 12th of Feb. 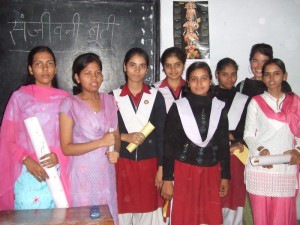 We had planned to send one girl and one boy to each class but again the school did not permit us to send males so I had to send only girls to the school. I have very good girls now who are interested in this issue, but they don’t want to volunteer, they want a paid job. But it’s okay, I know that it is hard to find people who are interested in working for free. But this makes my project tough because I don’t have regular donors and I do not want to be dependent on a few individuals. I need new people who could support my projects financially. 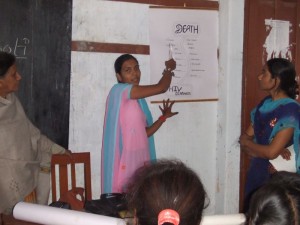 We had two foreigners also who helped us to make this event successful. One of them is Claire Abraham from Montreal, Canada, and the other one is Christina Hunter from San Fransisco, USA. Claire had been helping me for the past one month. She provided me lots of information and trained Sanjeevani Booti’s social workers. She was a big help but unfortunately she could only attend the workshop on the 11th. She had to go to Nepal to get her visa extended. Christina joined us only on the second day. 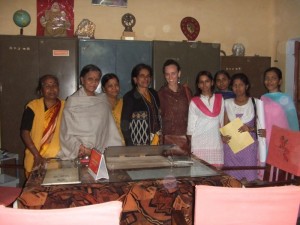 A few girls told us to show condoms to them, to talk about sex, and to talk about sexually transmitted diseases but we could not show them condoms because I was concerned about the school administration’s reaction. The girls want us to organize a big workshop for them where they can get deep knowledge over the subject. But I don’t know when I will be able to organize it because this is an expensive process. I am in touch with a few doctors and social workers from other organizations to make the coming event successful. 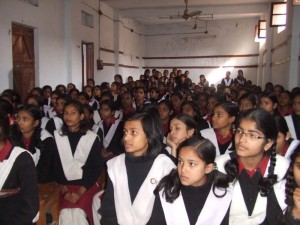 I thought it would be great for the kids to hear about HIV from the people living with HIV. There is a network of HIV positive people in Varanasi and I think I can bring some of them to the event. Everything was great but Iam  concerned about the future. I think I need grant proposals but I don’t know how to write them. Claire had promised to teach this to me and I am looking forward to it. She is supposed to be back within next few days.