There are street dogs everywhere in India and seeing them mating is not uncommon at all. And seeing them being stuck together after mating is also as usual as seeing a dog on the street. I had always thought why it happened to them because it looks really painful but I never tried to find the answer for whatever reason. A few weeks ago a friend of mine told me a really interesting Hindu explanation of why dogs stuck together after mating. He said the reason comes from the epic Mahabharta. As per Mahabharata it is said that Pandavas shared a common wife named Draupadi.

The reason why they shared common wife is because Arjun, one of the brothers, married  Draupadi in a swayamvar and when he returned home with his wife and other brothers they went straight to their mother Kunti. Kunti often advised her sons that they share everything they have (or obtain through Bhiksha, i.e. alms) equally amongst themselves. Upon returning home with Draupadi, on purpose, Yudhisthira addresses his mother first “Look mother, what we have brought “. Kunti, unmindful of what Yudhisthira was referring to, unassumingly asked her son to share whatever it is with his brothers. Thus, in order to obey their mother’s order all five accepted Draupadi as their wife.

Now the story begins about why dogs stuck together after mating. As per my friend in order to organize the sex, Pandavas decided that whenever somebody would enter in the room of Draupadi they would leave their sandals on the door so that other brothers know whats going on inside the room. Once one of the brothers was having sex with Draupadi and left his sandals on the door. Later a dog came and stole the sandals and went playing with it in jungle. Bheem, one of the brothers, also wanted to have sex and he approached towards Draupadi’s room and as usual he looked at the door first to see if somebody was inside and had left the sandals outside.

But since the sandals were stolen by a dog he did not see the sandals and entered in the room and found Draupadi having sex with one of his brothers. The brother who was having sex was seriously upset on Bheem and asked him why didn’t he check the sandals before entering in the room. Bheem was also upset and he was asking why didn’t he leave the sandals at the door before entering in Draupadi’s room for sex. Bheem said that he did not see any sandal on the door and they went out together but did not find the sandals. They were seriously angry on the person who did it and decided to find him.

They went to close by places looking for the sandals and the person who had stolen it and found a dog playing with it. They were so angry on the dog that they cursed him. The brother who was having sex said ” Oh dog, the reason why a person was able to see me having sex, which is a very very personal moment of somebody’s life, is only because you hence I curse you today that the whole world will see your private moment every time you have sex and since then all the dogs stuck together after mating and can’t separate until so many people have already seen them.

As per my friend, the curse is the reason why the dogs stuck. I did not believe my friend at all but since then I asked several people if they knew the reason and all of them told me the same thing. I asked them where did they read this story and none of them remembered. For whatever reason I don’t really believe that this story comes from Mahabharata but at the same time I have read so many other stories which are similar to the dog’s story. Anyways, I found the story very funny and interesting. Hindus have answer to every question and maybe this story is also the answer of dog’s pain:)

I have no intention of hurting someone’s belief or disrespecting the religion but I just shared this story because I found it really funny. I hope you enjoyed it:) 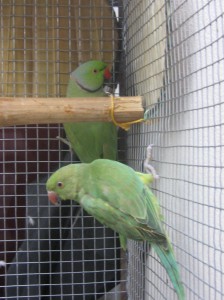 My family brought a parrot home a few days ago but when I first saw him, I got seriously upset because I do not like to see birds in a cage. I believe that they are made to fly, not to be stuck in a small crazy cage. I decided to let him fly back into the sky but by the time I took him on my roof top, he had already injured himself very badly and was just not able to fly. He was trying hard to fly but he could hardly walk a little bit. He hid himself behind a plant on my roof and just did not want to come out of there. My guest Attila also saw that parrot and told me that this parrot needed some more time because he noticed that his wings were already clipped. 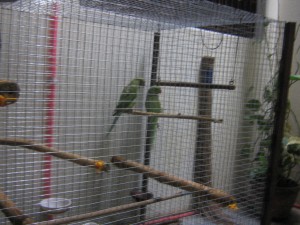 sports inside the cage

We decided to keep the parrot for a few weeks and feed him well and make him practice flying so Attila gave him one of his rooms where the parrot was living alone and freely. Attila asked me if there was any parrot doctor or expert in Varanasi and I also inquired about it and found that there was no such person in all of Varanasi who could tell us something about Indian parrots. Finally Attila contacted some parrot expert in Hungry and fixed an online video meeting and showed the parrot to the expert.

they love having a partner 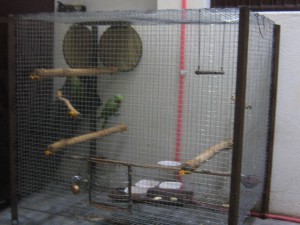 Attila was in regular touch with this expert and the expert told us so many things that we just did not know before and I am sure most of the people in India who have parrots do not know about these things and this was the reason why I decided to write a post about parrots also so that other people may also be benefited by this knowledge. Indians love parrots but we do not know what is good and what is bad for the parrots and we do so many bad things with the parrots which literally kill them. The expert told us that the average life of a parrot is about 25-30 years but most of the parrots in India survive hardly for a few years. So here I will mention some of the things that I learnt about parrots:

I never believe in the idea of catching someone’s freedom but if you decide make a parrot into a pet then please follow above instructions. I strongly believe that if someone follows these rules then their parrots will be happily living inside the cage and they will also be happy to see their parrots playing and enjoying being with them. I will keep updating this post whenever I learn something new but if you have any question about parrots then feel free to write me and I will try my best to get the right answer to you. Thanks.