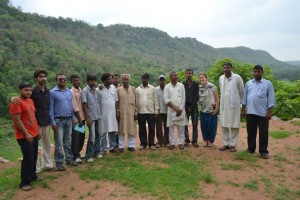 Alwar is a district in Rajasthanand I got an opportunity to visit it in July. I was kind of scared of the heat during summer time in Rajasthan and was hoping to see desert and dry climate but I was seriously surprised when I arrived there. Alwar was really green, full of hills, wild life (epically peacocks) rivers and had humid and wet climate. July is the summer time in India and Rajasthan is already too hot on Indian standard so I was really worried about the heat but honestly nothing bad happened. I went there with 14 other colleague and we all enjoyed the nature for the entire time we were there. 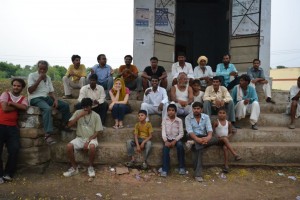 Having chai in a local market

We took an overnight train from Varanasi to Agra and then took a bus to Dausa.  From Dausa we hired a jeep to drop us at Tarun Bharat Sangh office in Bheekampura. It took us about an hour to get to Bheekampura from Dausa which was already very unique experience. Bheekampura and surrounding was basically hilly area with greenery everywhere. The climate was hot and humid was it was okay. Things looked very much different from the part of India I am. The costume was different, food was different, climate was different… We enjoyed our first day a lot. 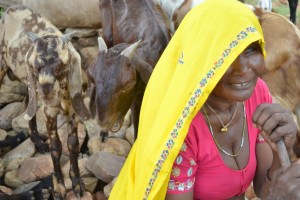 We stayed in Bheekampura for three days and every day we had a tour. It was just awesome experience. Tarun Bharat Sangh had arranged two taxis with a guide for us. We were out of the office most of the time. We were taken to so many small villages situated way away from just anywhere. I went to several places where there was no road. Community had made temporary arrangements by themselves. I noticed that more people smoked hukka in Alwar than any other village I had seen in Uttar Pradesh. They said that hukka is good in treating some small health problems like cold and cough, it was strange but this is what people said. 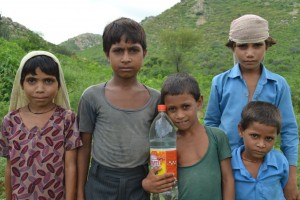 Something else that I noticed in Rajasthan that idea of covering the face amongst women was stronger than any other place I had ever visited in whole India. I saw more women keeping their face and head covered. Men were also wearing big turbans which looked very interesting. I asked a few people about this tradition and they said that practical idea behind this tradition is that it secures you from affect of heat during the summer time. It makes sense to me because we also do the same thing in Uttar Pradesh but I was not sure if this was the reason behind women keeping their face and head covered all the time. 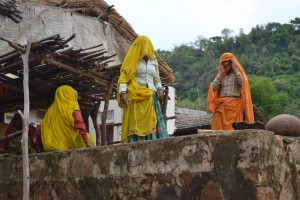 I think the reason why women were following this tradition is India has a male dominant society and Rajashtan has always been known for being very strict with the women. Anyways, I always enjoyed seeing different kind of people. We visited a Tiger Reserve called Sariska Tiger Reserve which was around 40 Kms from the place we were staying. I have always been so much concerned about decreasing number tigers in India and when I heard that we were going to Sariska, I was so happy and excited. 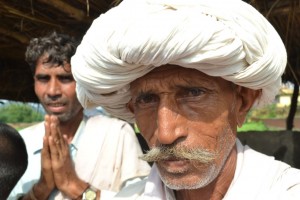 We arrived there, bought the tickets and now we were in. I was hoping to see a tiger and other wild animals but the sad thing was that I did not find any animal which is not usually found just anywhere. There were deers, jackal, chital, sambhar, nilgai and such animals. We were inside the reserve for more than eight hours and visited the Pandupol temple, waterfall and a few small villages. The temple was very nice. The temple is supposed to be the place where Hanuman met Bheem during Mahabharat era. The temple had a really unique style of Hanuman statue. Actually in whole Rajasthan they have a different kind of Hanuman staute which looks completely different than any other Hanuman staute I had seen before. 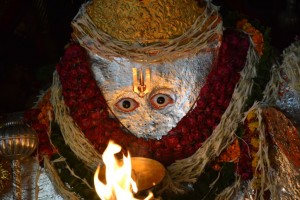 Returning time we stopped at one other temple and met a Baba which was like eight wonder to us. This temple was situated on the footstep of a hill and was surrounded by thick jungle from every side. It was super quiet, seemed like there was just no one there. Whenever we stopped talking, we only heard sound of wind, trees, monkeys, birds and peacocks. We were so shocked to see the temple and then a baba living there alone. When we arrived there we saw him standing on the rooftop of the temple alone. We became so curious about him and the temple. 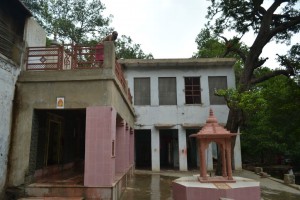 Baba on the rooftop of the temple

He was so nice to welcome us. He took us to his room where he offered us Chai and we chatted for an hour or so. He said that he left home when he was only 7 years old and since then he had been just wandering around, staying at ashrams and devoting his complete time for the God. He said that he had lived in Varanasi also for three years in 80s which made the conversation more interesting. We just talked for an hour or so and then he gave us a tour of his temple. Basically this temple was built where there was the samadhi of some famous baba. 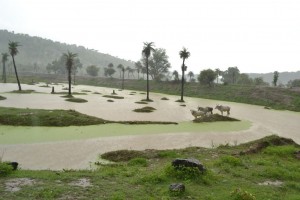 Can you believe it is Rajashtan?

I asked the Baba if he had ever seen any tiger and he said that every year during the dry season tigers come down from the hills to drink water and he had seen them several times. I asked if they ever disturb him and he said that animals are smarter than humans in this regard. They can easily recognize who is their friend and who is their enemy. We visited the samadhi, took the taxi and went to a village which was also just no where. I could not believe how someone could live there. There was no electricity or any other modern facility, even my mobile stopped working there. I asked the guide and he said that sometimes people go out to cities like Delhi or Mumbai to work for a few months every year. 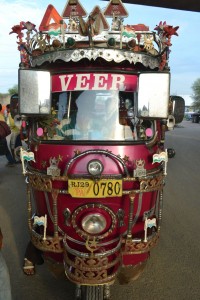 Finally we came back to the Tarun Bharat Sangh office after tiring but really nice day. I feel really grateful to Tarun Bharat Sangh for organizing the trip because such kind of trip can not be organized by any travel agent and I am sure that I won’t ever get any opportunity to visit those places again until Tarun Bharat Sangh is involved again in organizing the trip. Returning time we had booked our train from a small town called Bandikui which was around 3 hours drive Bheekampura. We had a direct train from Bandikui to Varanasi. Our trip was over and we finally came back to Varanasi but I won’t forget the hospitality of Tarun Bharat Sangh, those small villages, smiling faces, the people, wild life and just anything that I experienced in Rajasthan.