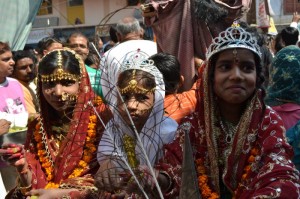 Shivratri is the wedding anniversary of Lord Shiva and is the biggest festival of Varanasi. It was celebrated on the 30th of March this year. Actually the date is decided by the Hindu calendar therefore it changes every year as the Hindu calender is a lunar calendar. As per the Hindu calendar Mahashivaratri falls on the fourteenth day of the dark fortnight of Phalguna (February/March).  I had always wanted to document this festival and I got this great opportunity this year. There are several temples in Varanasi which organize a wedding parade of Lord Shiva on the Shivratri day. I went to the a very big temple named Mahamrityunjay Temple which is famous for its parade. 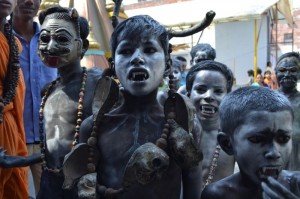 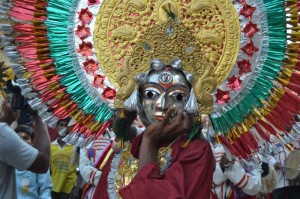 Finally I gave up with this temple and went to other one called Tilbhandeshwar Temple which is also one of the biggest temples of Shiva in Varanasi. People at this temple were very helping. They provided me all the information I needed and permitted me to come on the festival day and film inside the temple. I was really happy to have the permission. I showed up on the festival day around 8 am and was really surprised to see that preparation had already started way before I arrived there. There were already hundreds of people at the temple dressing up and preparing for the parade. 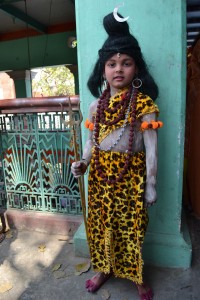 Since this festival is very important to the people of Varanasi and everybody wanted to participate in it, there was a committee formed to chose the right characters for the parade. There were all kinds of characters participating in the event such as all the gods, goddesses, demons and ghosts also. There were characters playing ghosts and demons also because it is said that Shiva had all kinds of followers even ghosts and demons and they had also participated in his wedding. It was really an amazing atmosphere there. People seemed so excited for the parade. 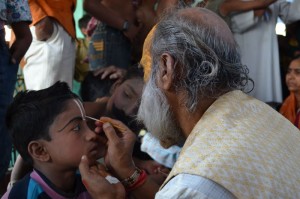 There were four makeup people who were doing making of the characters continuously and there always people in the line waiting for their turn. My friend Lane from Seattle who came to with me just to watch the parade finally ended up playing Parshuram. The people at the organizing committee were so happy to see a foreigner and they asked him if would also like to become part the parade and as usual Lane was up for it. I interviewed a few characters and the best interview was with the person playing Shiva. He was really interesting person. He said that he had playing Shiva for the past eight years and when I asked why only he, he said said that he takes this character very seriously and calls the Lord Shiva inside his body hence people respect him and want him to play Shiva. 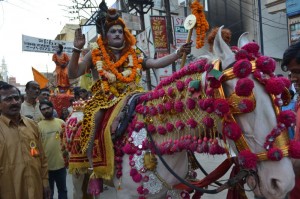 Lord Shiva on his horse

There was something else interesting about him that not only he but his whole family was actively involved in the parade. His real son was playing baby Shiva. After the makeup, the person playing Lord Shiva went to the temple to get blessing and this is time when he is supposed to call the God in his body. The parade started right after this. All the characters had sat on different animals horses and started the parade. The parade went to many different neighborhoods. I don’t know how but thousands of people showed up in the parade. There was loud music, people were dancing, snake charmers were showing snakes and people were firing crackers to celebrate the event. 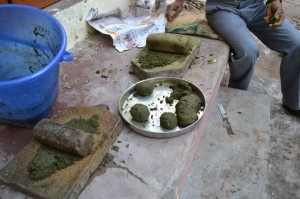 There were free bhang stalls also. Bhang was distributed because it is offered at Shiva temples and is considered as the blessing. The parade was on road for more than four hours. The parade ended back at the Tilbhandeshwar Temple around 6 PM. After the parade arrived at the temple, the person playing Shiva did a symbolic marriage with his real wife which symbolizes marriage of Lord Shiva with Parvati. After this marriage rituals were performed and finally the event ended. It was really interesting to see how people were treating the characters like the God himself. They were touching the feet of the characters. I was able to document the event, actually I filmed it also:) So happy to have done it.

Please click here to see more pics of the event:

1 thought on “Shivratri in Varanasi”