I saw that there were more working women in Nepal than India. I notice that most of the shops were run by women and Nepali women seemed to be in better condition than Indian women. 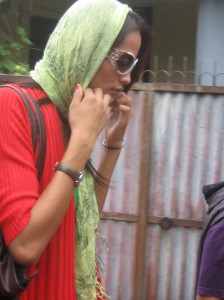 Nepal seemed to be more progressive in terms of women rights when compered with India. The women were traveling alone, going to office, running shops, women auto rickshaw drivers and the women seemed more friendly with men… it looked really cool to me. I was happy to see it. I saw so many alcohol shops run by alone women. I had never ever seen anything like that anywhere in whole India. Once I saw an alcohol shop with a woman owner and I decided to talk with her. I went there and started asking about alcohol first and when we became friendly I asked her about her life. 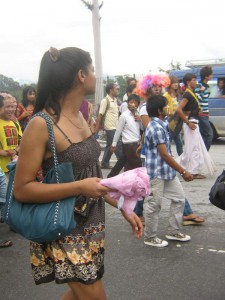 I asked her if she feels safe sitting alone at alcohol shops and dealing with male customers who are drunk sometimes and she told me that she managing the business is just like any other male member of her family managing the business; no difference so problem to her. I asked her if people in the society mind women working at the alcohol shops and again she said that Nepali society is very progressive when it comes to equal rights for women. I asked her if she had ever been to India and she said that she had never been to India before but had seen India on TV. In reality she did not seem excited about visiting India. 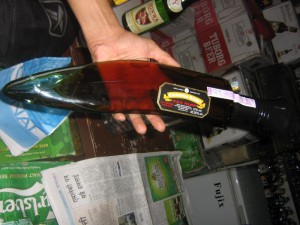 the most beautiful alcohol bottle I had ever seen

I told her that it is just not possible to see any women selling alcohol in India and that there are less percentage of working women in India and she said that she was very well aware of the situation of women in India. She said that there are so many Indian families living in Nepal and they also do not allow their women to go out and work. I asked her what Nepali people think of this situation and she said that to be honest, we think that Indians are crazy and backward people. I was surprised to hear this but in reality yes, we are much backward than Nepal in terms of women rights and equal rights for women. 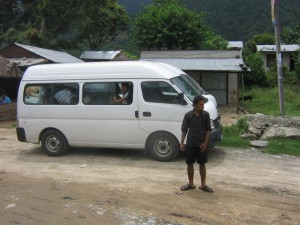 the most luxry way to travel in Nepal

The nature was just awesome all over Nepal. One could easily see that their nature is still untouched. Beautiful thick jungle, beautiful rivers, less industries, less people, less traffic and lots of mountains… it was just awesome. I really enjoyed nature a lot in Nepal. I also noticed that I saw only five big factories in my whole bus ride all the way from Sonauli till Kathmandu. In fact, two of them were Indian factories which sounds nice because there is less pollution because of less factories but there is another truth that there are less jobs because of less industries which means more poverty. 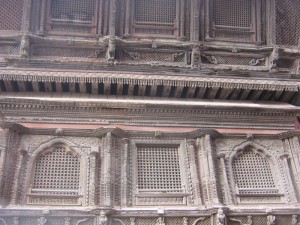 Poverty in Nepal really hurt me. There were so many family houses right along the Sonauli-Kathmandu highways so I got to see so many people doing things. But the really interesting thing for me was that nobody was doing anything, just sitting or talking with people, that’s all. It seemed like they just don’t have any work. I had never seen that many young people just sitting here and there and passing time. There were so many kids selling water bottles and snacks on the road. Nepal has been suffering a lot from its political instability for the past few years which seems to be the biggest reason of poverty of Nepal. I dont know, maybe some other reason but Nepalis were just not happy at all from their political system. 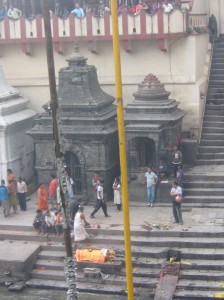 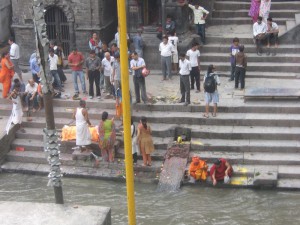 life and death at same place

We arrived Thamel which was full of hotels, in fact it was the most popular neighborhood in Nepal for backpackers. We went to several hotels but their price seemed too steep to us. Babu was telling me that we could easily find a hotel room worth 500 NR but none of them wanted to charge us less than 1000 NR. Finally we reached a hotel Annpurna hotel. They wanted to charge us 800 NR per night. I told him that I was a government approved tour guide in India and all the hotels give me discount in India then he agreed to give me a room for 500 NR. 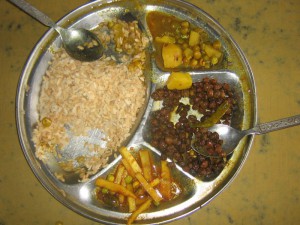 The hotel seemed nice at first but later we realized that pillow covers and bed sheets were used, cable connection was not working properly, telephone was there but dead. We complained about it and were promised to get everything on work by next morning but in fact this next morning never came before we left. In any case, I was not there to enjoy luxury, watch TV or make phone calls from my room hence I also did not mind it. We went out to take our dinner at some restaurant but most of the shops were closed by 8.30 PM. We found a restaurant opened and had our dinner there. 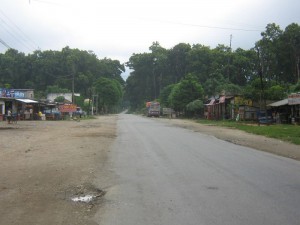 I had read several articles about nightlife in Nepal including dance bars and massage centers. A lot of the articles said that Nepal nightlife was safe but most of them said that it was really crazy and dangerous. I had several articles talking about how people went to a night club, spent a few hours, had a few beers and dinner and paid Rs. 40-50,000 and were misbehaved. Several articles talked about how 14-15 years old kids are involved in sex industry and work as pimps. I was curious about what was going on and we had decided to visit at least one night club while being in Kathmandu.

I was just walking here and there in Thamel and saw so many massage parlors. Once we were just passing by a shop which had a sign board saying massage parlor and I was showing this to Babu. Suddenly a hardly 15 years old guy came to me and asked what I was looking at. I told him that I was just watching the advertisements and he said that no, I was looking for something else, something special. I was like no I was just looking here and there. He again asked me if I needed some special service and I told him that I did not need any special service.

We walked away from there but this guy was keep following us and was asking if we needed a girl. He offered us young beautiful girls for really cheap price. He was not alone, there were so many pimps here and there watching tourists. Anyways, I was able to get back to my hotel safely. The next day we worked for a while, walked around, did some shopping… and it was a nice experience. I really missed veg Indian food as it was meat everywhere. But I liked something that they had drinks very easily available so I was enjoying all different kinds of alcohol.

I wanted to use an ATM in Kathmandu but was concerned about paying international transaction fee but Babu told me that a few Indian banks also have their own ATMs in Kathmandu like State Bank of India and Punjab National Bank. There was one State Bank of India ATM near Darbar Square. I used this bank and did not pay any transaction fee. So I would suggest anyone holding Indian bank card should just look for Indian bank ATMs in Kathmandu. Telephones were also so cheap in Nepal. I paid only Rs. 1 per minute for a phone call to India.

Since we were so interested in visiting a night club in Kathmandu. we were gathering information about it through online sources. But fortunately I met a guy at the NGO, where I was supposed to work, who was a male prostitute. I thought who could provide better information than him about night life in Kathmandu. I asked him about it and he suggested me not to visit any night clubs in Kathmandu as they are not safe at all, especially for tourists. He also told me the same thing what I had read online so finally we decided that we would not visit any night club in Kathmandu.

We visited a few temples, markets and participated in Kathmandu Gay Pride. Finally my time was over in Kathmandu and now we needed to head back to home. Babu told me that they had overnight buses from Kathmandu to Sonauli until 10 PM. We arrived at the bus station around 8 PM but all the buses were already gone by then. They said that the last bus was at 7 PM. So we took our dinner, stayed at a hotel near bus station and took an early morning bus to Sounauli and then another bus from Sonauli to Varanasi. It was a successful journey full of learning. I really plan to go back again to Kathmandu sometime for longer period of time.