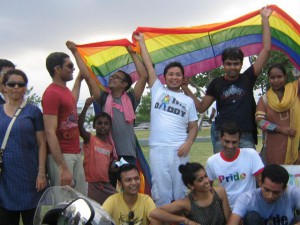 My friends and I

It was Chennai gay pride yesterday on the 27th of June and I came to attend the festival. This festival was not as big as I was expecting it to be but big enough to bring attention of local people and make them aware about something called “gay”. I was expecting for at least 1000-2000 people but it had hardly 400-500 people. The parade started near Labor Statue at Marina beach at 5 PM and lasted for over an hour. The parade was organized with the help of many organizations working in Chennai for LGBT rights but most probably Shakit Center was the biggest name. 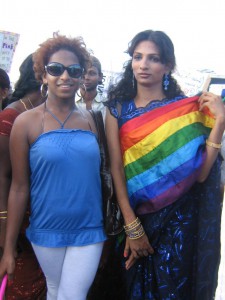 The people at the parade seemed to he really happy and energetic, especially people from LGBT community. Delhi and Mumbai pride had music and many people were dancing whereas Chennai parade did not have any music but still people were singing something in Tamil- which I did not understand for sure, jumping, laughing and dancing. They were hugging each other and seemed so happy. There were all kinds of people: gay, lesbians and hijras. But I noticed one thing that Chennai parade had fewer lesbian couples when compared with Delhi and Mumabi parade and this parade seemed less open than Mumbai and Delhi one. 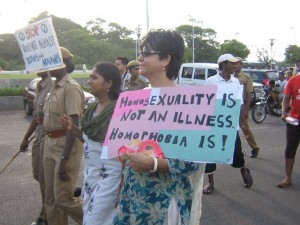 I also think so

Participants of Delhi and Mumbai pride were much open in expressing their relations with their partners like they were holding hands with each other or just walking together which showed that they were a couple but Chennai Pride did not have anything like this. The participants of Chennai pride were more like did not want people to know about their partner. I think since South India is more Hindu part and people are seen as more religious, maybe this is the reason why gays of Chennai want to hide their relations more than Delhi and Mumbai people. Anyways, I was happy that they at least organized such event. 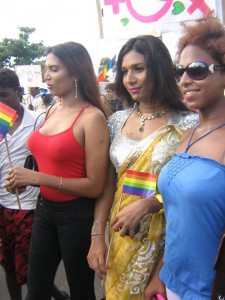 I was talking with one of the organizers of the parade and he said that last year the parade was bigger than this year but the important thing was that this year more community members participated whereas last year there were more outside supporters which increased the number of people in the parade. I had also noticed the same that Chennai parade did not have many outside supporters whereas Delhi and Mumbai had big number of supporters like students and families as well. The Marina beach area is a big picnic spot for Chennai people and since the parade was on Sunday, there were thousands of local people who watched the parade. 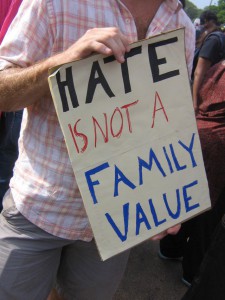 It was good the parade took place at such place where locals got the see the parade. I also distributed pamphlets to the people around and masks to the people who seemed interested in joining the parade but seemed confused. The usage of masks was on a bigger level here in Chennai than Mumbai and Delhi. I saw a few people wearing two-three masks at the same time to cover their whole face. I talked with a few participants of the parade who were wearing the masks and they said that Chennai is still so conservative about gay culture hence they did not want others to know that they were also at the parade. 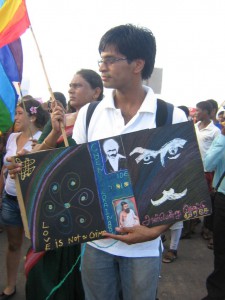 Their wording was “if others see me participating in the parade, they would think that I also have the same taste.” I know that gays are made of fun of all over the world and many people hate them just because of their sexuality but I expect the big cities to have a better view about gay culture but Chennai did not seem to have this better view for gays. I asked Mr. Annirdudhan Vasudevanthe, one of the organizers of parade, about the change in conditions after Delhi High Court decision of making gay relations legal and he said that there is some change for sure but not really much or not something that really changed the society. 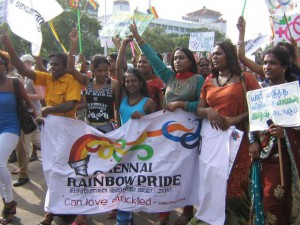 People from the organizing committee

Annirudhan was happy to say that at least people have started talking about it and now at least they know that there is something called the “LGBT” community and they have also their rights. He said that the condition is not going to change really soon and that it will take sometime but hopefully someday they will also have equal rights in the community. He said that the LGBT community is discriminated against everywhere in the country and they demand protection and medical health care from the government of the India. He said that many people think that homosexuality is a disease which can be cured by giving some special therapy which is just not true at all. 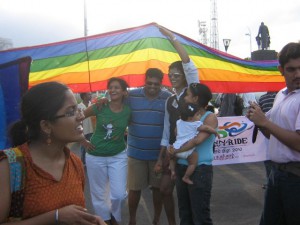 There were families also

Annirudhan said that being homosexual is neither a fashion nor abnormal at all; it is a natural process and anyone could be born with such human nature. I also believe the same. He talked about the Aligarh Muslim University’s professor Srinivas Siras who was found having sex with a same-sex person and was suspended only because of this reason. Prof. Siras later committed suicide because the university administration had funded a sting operation to video Prof. Siras having sex with a same sex partner. 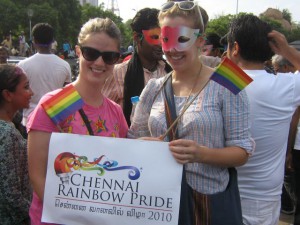 Mr. Annirudhan said that even though gay relations have been legalized in India, Prof. Siras was still punished. I was talking about the same matter with one of the participants and he said that said that the government should ask the university about how they dared to record Prof. Siras personal life without his consent. Recording somebody’s personal life without without their consent is a punishable offense under Indian law because it comes under the right of privacy act and government police should register a complaint against the university administration and punish them, not Prof. Siras.

I also think that it is true that nobody has rights to do such thing. There are so many beautiful laws in India but implementation of these laws, how affective are they??? So many problems with gay community in India. I am happy that I came to attend the pride and I would like to come here again and hope that the Chennai gay community will have fewer problems when I come here next year and there will be more support from outsiders as well. One thing is very sure that the gay community will not be able to get equal rights in the society until we straight people support them so please come together to help our LGBT community and make a better world. 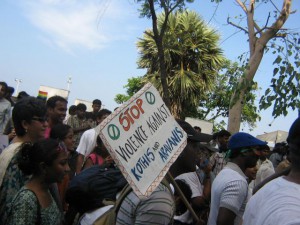 There was a party also the night before the parade whereas Delhi and Mumbai had a party on the parade night. This party was organized at a four-star boutique hotel called Le Waterina situated at Kotivakkam Beach, Trivanmauyr, Chennai. This was the most expensive party I had ever been to. There was no entry fee in Delhi’s party, Mumbai party was Rs. 500 but drinks were not so expensive inside whereas the entry fee for Chennai party was also Rs. 500 and the drinks were really expensive. Anyways, I got in and met a few locals who had come to attend the party. 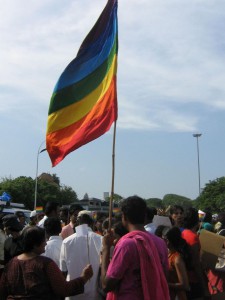 I met a guy who did not even know about the parade taking place the next day but he knew about this party. I asked him how did he come know to about the party and he told me that he got an SMS on his mobile about the party. I asked him if he would come to the parade as well and he was like why would I come to the parade. He seemed hesitant to talk about the parade and the party but I saw him the next day in the parade. I think he was also a gay but did not want to talk about it and I expect such behavior from the LGBT community in India because I know that the LGBT community always hides their sexual identity because there is so much discrimination against them and they do not have equal rights. 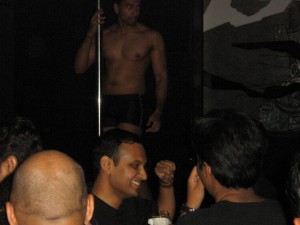 Go-Go dancer at the party

This party showed me something new, something that I had not seen before: a male go-go dancer. I was thrilled to see it. The party had a famous DJ from Delhi who was playing western music all the time and then he announced that they had a dashing boy from Bangalore who was going to dance tonight. This go-go dancer appeared in shorts and a T-shirt but later he took off his T-shirt and was wearing really short shorts. He seemed like a popular dancer because many people knew his name. I think he was in the party for more than an hour and I think his presence boosted-up the party. People went crazy to see him. I had seen such only on TVs before and it was so fun to attend the party.