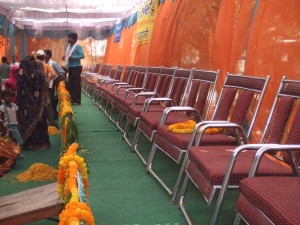 Lok Samiti organized a group wedding of 32 poor couples again this year on 10th of May. It was again a huge event where more than 8,000 people were present. I reached there around 1 o’clock afternoon time and saw all the families preparing for the wedding; people were so excited. Lok Samiti had organized this wedding at a Hanuman Temple near Rajatalab, Varanasi. Definitely the temple did not have enough space for that many people so they had organized everything right behind the temple on an open space. They had a tent where there was a well-decorated stage for couples. 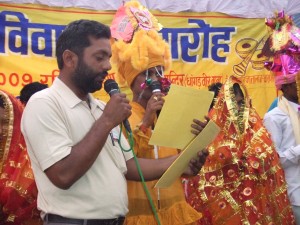 Groom swearing to not ask for dowry in future

Lok Samiti had also arranged food for the people who had come to attend the wedding. The main idea behind organizing group wedding is stopping dowry and helping poor people get married. Since this wedding is registered and everything is organized by Lok Samiti, the groom’s family could not even think about asking for any dowry to the bride’s family because they sign a document saying that they will never ask for any dowry in the future. I really like this idea. All the couples who had got married under these condition were extremely poor that they could not get married on their own. 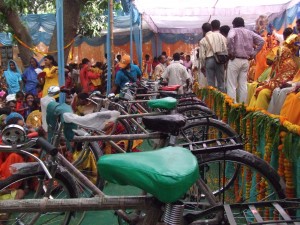 Lok Samiti gave bicycles to all the grooms and sewing machines to the brides so that they can be self dependent. Actually a lot of people come to Varanasi city area from the villages to work and the idea behind giving bicycles is that these people can use theses bicycles to come to Varanasi and work. The same idea is behind giving sewing machines as well, that the brides could do some sewing work and make some money. A lot of people from different parts of India and abroad had donated money to make this noble event true. I was responsible to bring some foreign donation. 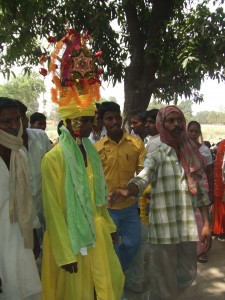 Lok Samiti’s members had been collecting donations for the past three months and finally they had collected donations worth Rs. 2,60,000 which included cash, grains, clothes etc. The MP (member of Parliament) from Rajatalab area was the biggest donor who had donated Rs. 66,000 and his wife was second biggest donor who had donated sarees worth Rs. 15,000. The same way several people donated and gifted a lot of different things. I was also told to give something but I could not because of this crazy economy and no work for me. Last year I had donated clocks to all the couples on behalf of Sanjeevani Booti. 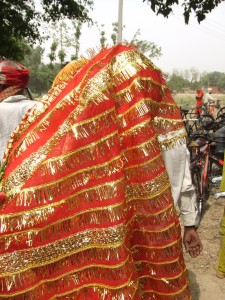 Lok Samiti had appointed a few people in different villages to see if anybody wanted to get married under group wedding and these people went to all the villagers asking about it. First of all they chose the boys and then told them about the girls who wanted to get married. They introduced their families to each other and fixed the wedding. I heard that some of the couples had come from other districts. All the couples were different ages, some of them seemed over 40 and some of them seemed only 15-16 years old, I am not sure about it but Lok Samiti said that they choose only people who are over 18. 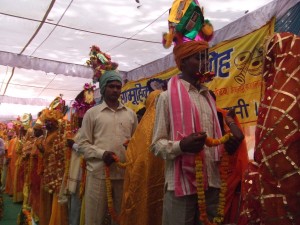 Lok Samiti had organized the group wedding for 30 couples but at some point it seemed like all 30 couples would not be present there. But at last not only 30, but 32 couples got married. Two of the guests just decided to get married. They chose a bride who was also a guest there and informed Nandlal Master, President of Lok Samiti. Lok Samiti had arranged only 30 chairs, specially designed for weddings, �so they had to bring two normal chairs on the stage and these two other couples also got married. 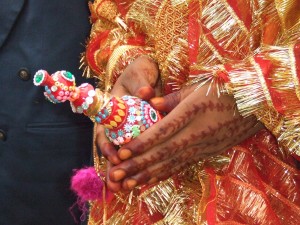 This group wedding was a little bit different from the usual Hindu wedding. In this wedding couples adorned each other with flower garlands first, grooms put sindoor on the bride’s head, held the�hand with each other (symbol of long lasting relationship), and circled the Hanuman temple seven times instead of the fire. After all these things the families were free to do whatever rituals or other things they wanted. After completing the seven circles, grooms and brides returned to the tent and then families completed other rituals. 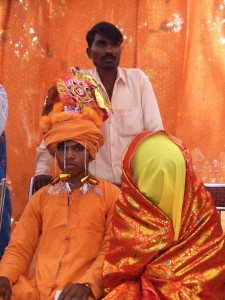 It was really so fun and interesting. This year’s wedding seemed more liberal from the bride’s point of view because all the brides were told to show their faces. In the last year’s wedding all the brides faces were covered with their saree. Although brides had come up on the stage with their faces covered; later Lok Samiti told all the brides to show their faces. It was so fun to see 32 couples getting married same time. My overall experience was nice but there were a few things that I did not understand; like I saw a few brides sleeping. It seemed like they were not interested in being married or maybe getting married doesn’t mean anything to them. 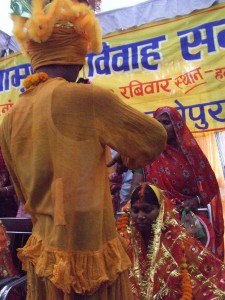 Lok Samiti is planning to organize a group wedding of 51 couples again next year on the 10th of May. Actually they have chosen this date because it is the wedding anniversary of the MP (Member of Parliament) from Rajatalab area. And since he is always the biggest donor and help for this wedding, they have decided that they will organize this wedding again and again on the same date. I am excited for the next year and hope to see all the brides and grooms excited and laughing and awake.