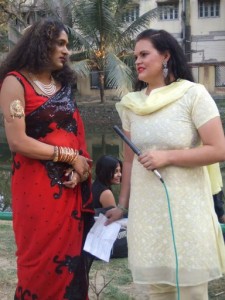 Laxmi (a transgender) and Seranna

Seranna started her documentary called  Comparing Countries Compassion in Kolkata which is about sex work and sex workers in India. It is Seranna’s project which she will be doing in different countries but she wanted to start it from India. She has chosen me to help her organizing interviews and she wants to interview me also regarding my work with Sanjeevani Booti. She has hired camera crew from Delhi who don’t seem professional, especially the  cameraman. He is crazy. He always fights with other crew members. Actually they all fight with each other in front of interviewee. Sometimes they start asking questions to the interviewee. Seranna was also upset sometimes but we did not have any hope. This production company is big and is run by a award winning person for his direction but unfortunately he was not with us.

This documentary is about comparing laws in different countries regarding sex workers. I really liked this project and she has given me a very challenging job of giving ideas of direction and doing translation. I translated few interviews of sex workers. We interviewed a few sex workers, social activists, professors of university of Kolkata, transgender people, children of sex workers… it was awesome. We did a condom usage demonstration also and trained sex workers about how to keep themselves safe and how to make more money from their clients. This documentary will be a huge success for sure. I feel fortunate to be part of it.