I think condoms are one the biggest inventions of science, one of the biggest gift of science to us but still a lot of people don’t use it and the thing that made me write this post is the people who are shy buying condoms. I never understand why people are shy to buy it. They don’t want to pronounce this word, why? They go to the shops thinking that they will buy condoms but buy candies. It is kind of hard work for them to say that they want to buy condoms.

One of my very close friends got married last year. I had gifted him a big packet of condoms. After few days of his marriage he called me and said that he wanted to meet me immediately but I was far away from home but he was keep telling me that it was some important work and he wanted to meet me. I told him to meet me after one hour and I immediately left my work and got back to him. He was still standing at the place where he had called me from and just waiting for me.

I was thinking that something wrong happened and he wanted my help so I was a little bit tense but when I met him and asked why he wanted to meet me. He took me to a corner and said that he wanted me to buy condoms for him. I thought he was joking but no, he was serious. He was waiting for me for an hour because he did not want to buy condoms. I asked why he did not buy it by his own and he said that since all the shopkeepers in his neighborhood knew him personally he was feeling shy to ask for condoms.

I told him that all the shopkeepers knew that he was newly married and they knew that he will have sex so why to shy. But still he was not comfortable buying. I asked him where did he get the condoms from for the last few days, obviously my gift was not ever-lasting, and he said that he went to some other neighborhood to shop. I wanted him to buy condoms and I was keep telling him to go and buy but he did not want to do it. Finally I took him to a shop and told him to just stand there but the funny thing was that he ran away before I reached at the shop.

I met him few days ago and asked if he has started buying condoms on his own and he said that he doesn’t buy uses condoms anymore because it was difficult for him to buy it and then get rid of it. I want him to use condoms and still think about some way to make him comfortable buying and getting rid off it. But I don’t think he would ever like to use it again or just hear me. He likes listening about it and but it is hard work for him to buy and get rid off.

The second story is also about my one other friend who runs a convenient store. I go to his shop everyday but never knew that he also sells condoms because condoms are always hided. I saw the packet few days ago and bought few pieces. I pay him monthly so he was supposed to write it down in his register but he did not because he did not want to write that I bought condoms. I really did not understand what was the problem with him.

I have talked him more than five times about it but he always tells me that he doesn’t want to write it. He is shy that his father or other family members would see that he sells condoms also. I doesn’t make any sense but it is true. Finally he counted amount for the condoms I had taken and wrote that I had bought a coconut oil. My one friend who is consumer is shy and my other friend who is seller is also shy. I don’t know how these kind of problems will be solved but it is definitely a big problem in a country like India where there are huge number of HIV patients and the number is increasing rapidly. 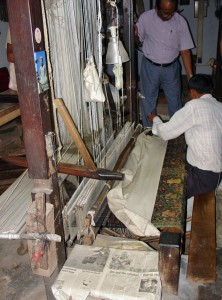 Benares is the biggest consumer of condoms in Uttar Pradesh but here the condoms are not used for birth control or to prevent STDs, they are used for weaving. About 6,00,000 condoms are sold in Varanasi everyday but most of them are used only for weaving. They rub the condoms on loom’s shuttle to make the weaving process faster ( http://news.bbc.co.uk/2/hi/south_asia/3934275.stm.) I am sure condoms help weavers a lot.

More than 90% of weavers in Benares are Muslims. If the same guys who use the condoms for weaving start using it to control birth, our India would change rapidly. The way condoms make weaving process faster, it will help us develop faster. The way condom is helping weavers, it can help the whole India but we just need to learn how to utilize it.