I saw something very strange, maybe it could be the strangest thing for an Indian. I was sitting in an auto rickshaw when a policeman stopped it. He came and sat next to me. Police never pay the fare for any transportation whether it is auto or bus or train. After a drive of two-three minutes someone else wanted to stop the auto, but my driver did not stop it. My driver said that the guy who wanted to stop the auto was also a driver and wanted a free ride. That other driver seemed so angry and was shouting loudly.

The second driver showed up again near the railway station. He had reached there before us. Also now he had his auto rickshaw which he had stopped and was waiting for us. This time our auto stopped. The other driver just came and grabbed the collar of the policeman’s shirt and started abusing him. I was shocked to see a auto rickshaw driver abusing a policeman. Not only me but everyone else in the auto rickshaw was shocked. He was kept abusing the policeman and the policeman was just telling him that he will see him later. 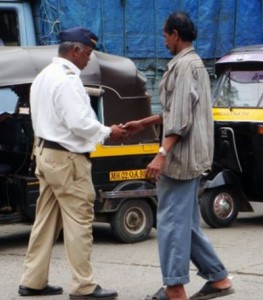 I liked this answer a lot. One other auto rickshaw driver told me that the police have fixed a rate for different routes. They charge the drivers who work in the downtown area Rs.60. Heavy vehicles are not allowed to enter inside the city after 8 o’clock morning time but still a lot of trucks and tractors could be easily found inside the restricted area during restricted time. They are stopped at every crossroad by police but not to be checked, because they give a bribe. Truck and tractor drivers always keep a few Rs. 20 notes because they have to pay the police at every crossroad.

I just can’t imagine how shameless people they are. He was called out right before two minutes but again did not pay the fare. I know the rickshaw driver will be arrested and beaten hard for sure, but I really liked the way he responded to the cop. I think we need more and more people like him who could fight the most dangerous terrorists for India- THE POLICE.